THE South Australian Government and the University of Adelaide have entered into a collaboration which both entities hope will increase their role as global leaders in dryland agricultural research. 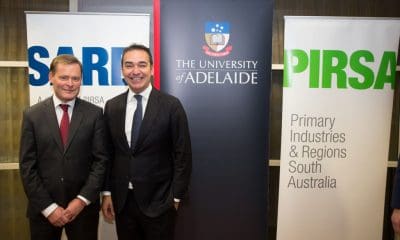 It will give University of Adelaide scientists access to five state-owned research farms, and will bring a wide range of academic knowledge to the agricultural sector in fields such as mathematics, engineering and machine-learning for the application of new technologies.

Two of the farms will be also used to trial new ag-tech inventions, and demonstrate them to farmers to encourage early adoption.

Primary Industries and Regions SA (PIRSA) and its research division, the South Australian Research and Development Institute (SARDI), already have a long history of working with the University of Adelaide.

The new partnership has been designed to reduce red tape, encourage multi-disciplinary research, and bridge the gap between academia and applied research to generate high-value outcomes and export opportunities.

Already under way is a project which uses machine learning to interpret satellite imagery to identify grazing pressures in remote farming areas in real time.

This will potentially replace a system that only assessed these regions once every seven years. 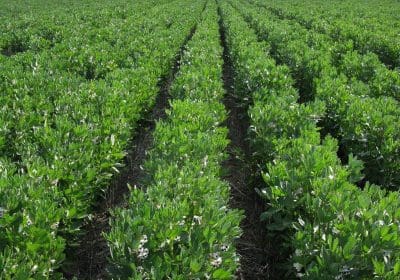 Faba beans are an important crop in South Australia, and the partnership between the University of Adelaide and the SA Government is looking to develop herbicide-resistant varieties. Photo: Yorke Peninsula Council

University of Adelaide Vice Chancellor Peter Rathjen said the university’s Roseworthy and Waite campuses already had a global reputation in the areas of cereal breeding and genomics, winemaking and viticulture, and animal sciences and production.

“We think we have an opportunity to build on that brand that is Waite and Roseworthy to carve out a place in the world of dryland agriculture to be truly global leaders in this space, but to be globally competitive in the first instance we need to be able to operate at scale,” Professor Rathjen said.

“We need to be able to assemble cross-disciplinary teams that make available the breadth of skills needed to provide meaningful solutions – not just agriculture but agriculture married with engineering, with artificial intelligence, data science, business, economics, environmental management.

“Scale will also give us the opportunity to bring together more meaningfully the research we do with the training of the next generation … training a generation that will implement the solutions that we discover.”

Agriculture is South Australia’s largest industry, contributing almost $20 billion to the state’s economy and supporting 152,000 jobs in the 2017/18 financial year.

South Australian food and wine is exported around the world to some premium markets, and its agricultural sector has long been recognised as an innovator in sustainable production in low-rainfall environments.

The University of Adelaide led a delegation to Morocco in June, meeting with government representatives, agencies, research institutes and universities.

This included a visit to the International Center for Agricultural Research in the Dry Areas (ICARDA), which has implemented research-for-development programs in 50 countries across the world’s dry areas from Morocco to Bangladesh.

“We want to produce knowledge in sustainable cereal production, water management, dryland farming systems and to do that by bringing to these pressing global problems new technologies and new collaborations.

“Dryland agriculture can be big for the university and for the state, but it will require partnerships and today’s launch is the start of that journey.”

PIRSA and SARDI have been co-located at the University of Adelaide’s Waite Campus for 25 years along with many other nationally significant research organisations including CSIRO, Australian Grain Technologies and The Australian Wine Research Institute.

The campus has the largest concentration of research expertise in the Southern Hemisphere in plant, food and agricultural sciences. 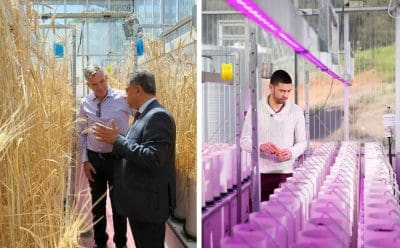 The Waite campus is a leading research site for phenotyping of varieties suited to dryland agriculture. Photo: University of Adelaide

South Australian Premier Steven Marshall said the agreement united the ambitions and strategies of two of the state’s major primary-industry research institutions, and would benefit the entire country.

“Technology is changing so rapidly at the moment and our growing agriculture industries are adapting to these new technologies, which include artificial intelligence, machine learning, the Internet of Things and satellite technology,” Mr Marshall said.

“We envisage this partnership will drive even greater research investment into our already world-leading facilities and will strengthen the intellectual networks and the research capability of the university, PIRSA and SARDI and enhance South Australia’s already strong reputation for quality science and technology.”

SARDI executive director Peter Appleford said PIRSA’s researchers across the state would benefit from the leverage the partnership offered.

“Our focus is on delivering innovative world-leading applied research so South Australia’s primary industries can be internationally competitive, and working together with the university can only enhance our capability in this space,” Dr Appleford said.