TWO former federal agriculture ministers are voicing a call by the Crawford Fund for an increase in the proportion of the Australian aid budget invested in agricultural research.

Ahead of Thursday’s launch of two reports commissioned by the fund, board chair John Anderson and board member Joel Fitzgibbon have affirmed the benefits of aid-funded international agricultural research for development.

Mr Anderson said the reports, backed by international analyses, show a ballpark benefit-cost ratio of 10:1 on investment, and many less quantifiable social, environmental, and diplomatic benefits in-country and to Australia.

“With only 2.5 per cent of the aid budget invested in international agricultural research for development, it is in Australia’s interests to increase the proportion invested to maximise impact and grow those benefits for all,” Mr Anderson said.

“It’s a no-brainer that more of Australia’s development assistance budget should be invested in international agricultural research.”

While Mr Fitzgibbon and Mr Anderson come from different political hemispheres, they share the same opinion on where Australian expenditure should be heading.

Along with Crawford Fund CEO Dr Colin Chartres, they will be putting it forward in briefings with decision-makers prior to the launch of the reports at the National Press Club. 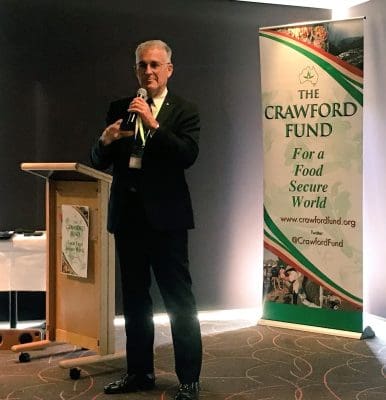 “Agriculture and food security are front and centre of world attention as we face the complex challenges of climate change, conflicts and COVID-19.”

“These challenges exacerbate food insecurity and undernourishment and impact most heavily on the 900 million people already living in poverty.

“International agricultural research for development is well-targeted, contributes to the food and nutrition security of low-income countries, their environmental and economic sustainability and resilience, and to gender equity and regional stability.

“It is also something that Australia is very good at, and it brings significant returns to Australia’s farmers, our biosecurity, scientific knowledge and global diplomatic reputation.”

Australian investment in R&D for agriculture is mostly through the Australian Centre for International Agricultural Research (ACIAR).

Through partnerships with Australian and overseas institutions, ACIAR aims to improve the productivity and sustainability of agricultural systems and the resilience of food systems in partner countries.

The Crawford Fund works alongside ACIAR to build the capacity of scientists and farmers.

Mr Anderson cited examples of its benefits to Australia, including ACIAR’s investment in the International Maize and Wheat Improvement Center (CIMMYT), to which more than 90pc of Australian wheat varieties, including Borlaug 100, are linked.

Australian aid has also been invested for many years in research aimed at addressing diseases transmitted from animals to humans, including: malaria in Indonesia; antimicrobial resistance in Fiji; and bird flu in Cambodia, Laos and Vietnam.

Examples in the cropping space include ACIAR’s projects on the rice-wheat rotation in India, which fostered the adoption of the Happy Seeder machine used to direct seed wheat into uncultivated soil, and without the burning of rice stubble.

In Laos, an ACIAR project has introduced machine instead of hand planting drought-tolerant rice, which provides farmers with enough time for other activities, including vegetable growing.