UQ Queensland Alliance for Agriculture and Food Innovation Centre for Crop Science director Ian Godwin gave an update on the four-year project during a Grains Research and Development Corporation webinar this week.

Professor Godwin said the research used gene-editing technology to produce sorghum lines which would benefit both growers and intensive animal industry, which uses most of Australian sorghum. 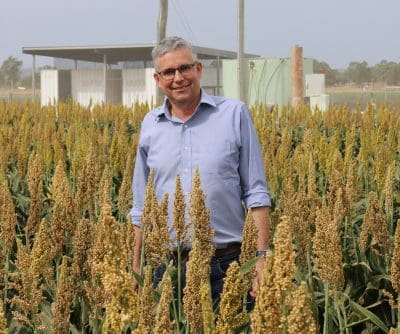 He said the “tight starch-protein matrix” in sorghum had been a long-term problem for researchers, with this structure causing limitations in the digestibility of the starch in the grain.

He said due to this matrix any increases in the protein content usually resulted in less starch being absorbed by the animal and reduced growth outcomes.

“More protein in itself was not likely to make it more attractive to end users, but if we can make more protein and make that protein more digestible, then that’s what we are aiming for.”

Professor Godwin said researchers focused on three gene families associated with grain protein, size and digestibility and, in the summer of 2018-19, grew their first field trials at Cecil Plains and Gatton, west of Brisbane.

“We increased grain size without having any effect on seed number.

“We also found that we were getting large seeds, and that larger seed did not have the predicted effect of reducing the protein content, because of the genes that we had manipulated.”

He said the best lines produced the trifecta of larger grains, more seeds, and a higher level of more digestible proteins.

“We got up to 16 per cent protein content which compared to the industry average of 10 per cent is fantastic and these things were actually more digestible.”

In October, researchers selected the best varieties to undertake a broiler feeding trial in Sydney with 320 day-old chicks.

He said researchers compared their lines with commercially available varieties, with the feed mixes set to have the same level of nutrients.

He said the traditional sorghums required a higher level of soybean meal and soy oil to reach the targeted protein levels.

Professor Godwin said this trial tested whether the increased protein sorghums would be digested similarly to the commercial sorghum fortified with higher levels of soy.

“The answer was pretty pleasing to us because…there was no significant difference in growth and in fact, in some of our lines, the feed conversion ratios were as good or better than the commercial sorghums.

“We know it is not about the higher protein alone, it is about the quality.

“If you do have higher protein with higher digestibility, it leads to really good feed conversion ratios and you are saving in the amount of soybean meal you are putting into that diet.”

Professor Godwin said reducing the amount of soybean meal required would result in significant cost savings for the poultry industry.

“At current prices our better sorghums reduce the cost of feed by about $88-100 per tonne because you are using significantly less soybean meal.

“So, that transfers to being worth somewhere between 25 and 40 cents per chicken in feed costs.”

He said these numbers become more significant when considering that Australians eat one million chickens per day, and it takes about one tonne of feed to produce 250 chickens all the way through to maturity.

“So with 15pc versus 10pc protein, the whole industry, if they adopted higher protein cereals, would save close to $500,000 per day because of less imported soy.”

Professor Godwin said the grains and intensive animal industries would have to collaborate to ensure growers could reap some of the benefits of this new sorghum.

He said the larger grain and more seeds would result in higher yields for growers.

“From a grain growers point of view, increased grain size will give higher yield, potentially less screenings, a higher demand for sorghum and hopefully a higher price.

“Another thing we need to think about is potentially this could create an increase in export demand for our sorghums and some of the biggest importers of soybean meal put it into animal feed, they are on the list.”

Professor Godwin said he believes this technology can be transferred to other feedgrains.

“These sort of changes that we made might also be transferrable to things like feed wheat and feed barley.

“So, if you can do that and replace our reliance on imported soybean meal it is of great benefit to the feedgrain industry.”