IN 1998, a group of 23 farmers and affiliates on the Liverpool Plains of north-west New South Wales took a long hard look at their enterprises, and found it was time to take greater control of their own destiny.

They formed an incorporated association to help them do it, and by 2002 had set up an agricultural merchandise business to provide a revenue stream for research, grain marketing and value adding.

Under the banner of AMPS Agribusiness Ltd, the organisation has added $403 million to grower incomes, with around 35 per cent of that coming from early time of sowing alone.

Adopted over 250,000 hectares, the practice has added an estimated $190 per hectare to growers’ wheat incomes annually in the three years to 2017 by avoiding yield loss due to late frost and hot and dry springs.

AMPS Moree-based agronomist Tony Lockrey said of all AMPS’ research areas, this had been the “game-changer”.

“It costs the grower nothing to sow earlier, and we find again and again it puts more dollars in growers’ pockets,” Mr Lockrey said.

Giving AMPS confidence in its results are trials spanning up to 20 years at some sites, and reflecting small-plot and large-scale trials in most north-west NSW cropping areas.

At the end of this otherwise forgettable winter-cropping season, it will yield the AMPS research team of up to four staff, plus casuals, data to crunch on more than 13,000 plots, a record for the organisation.

AMPS Agribusiness Ltd is an unlisted public company controlled by a six-member board, and has 67 shareholders.

Spring Ridge farmer Dave Brownhill is among them, and said AMPS had come to play an important role in north-west NSW by supplementing those results which came out of research organisations funded partly or fully by government.

They include the Grains Research and Development Corporation, CSIRO and the NSW Department of Primary Industries, which also sometimes contribute to AMPS projects.

“We don’t like to think we compete with other research organisations,” Mr Brownhill said.

“We are just focused on what our customers and clients are looking at as important parts of their business right at this point in time.

“That’s why we plan to work closely with the RDCs and DPI if possible.

“After all, it is for the common good, and benefit of all agriculture.” 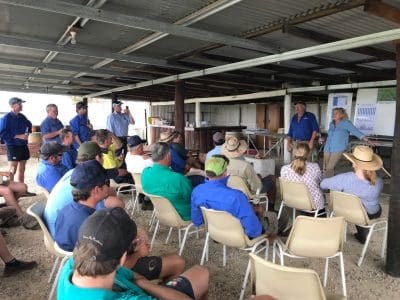 Mrs Simson said AMPS’ ability to fund its own projects gave it the means to pursue its own research goals.

“It’s great if we can collaborate with organisations like GRDC on projects, but our objectives aren’t going to match up on everything, and having the model we have allows us to go it alone when we need to.

“The fact that we can keep the projects going that we feel are important has given us this incredible data set we can just keep building on.”

What started as shared objectives in the late 1990s is now throwing ideas and learnings to the wider farming community.

Through field days, reviews and GRDC Updates, Mr Brownhill said AMPS was now getting its information out to more than 1200 people directly, helped by the engagement of Sarah Ball on extension.

“We’re building on our reputation with growers and industry, and forming closer connections with a number of key companies, as well as engaging external expertise.”

AMPS’ foundation members were initially drawn together as clients with a shared agronomist who were concerned by rising input costs, a reduction in production research, and a desire to increase yields and improve input efficiencies, as well as add value to their grain.

This has been achieved through AMPS Agribusiness’ storage-and-handling arm with sites at Caroona and Premer.

AMPS Commercial, with branches at Armatree, Moree, Tamworth, Walgett and Caroona, is the main source of income, and resells fertiliser, chemical and other inputs to members and non-members.

AMPS Research’s sub-committees are responsible for local research prioritisation, organisation and logistics, and are based on the Liverpool Plains, and at Armatree, Gulargambone, Moree and Walgett/Burren Junction.

“We continue to refine trial equipment and systems, which is evident in trial results, and manage changing group dynamics throughout the regions.”

Sustainability for the company and for its shareholders has been an aim of AMPS from the start, and it now has a long-term target long-run dividend yield of 6-10 per cent.

Subsidiaries must aim to break even after allowance for rent.

“High-income years create an opportunity for balance-sheet strengthening, for investment, and to create reserves for low years.” 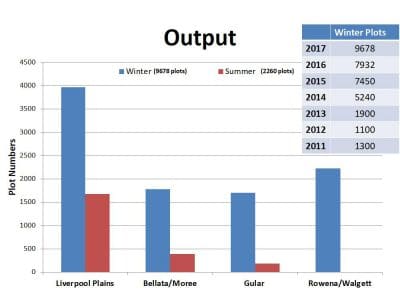 Mr Brownhill said AMPS research had demonstrated the ethos of the business.

“It creates a point of connection, engagement and trust, and it differentiates us from straight merchandisers.

“It builds farmer engagement, and gives us the opportunity to lead in production research.”

Mr Brownhill said AMPS was about more than science and money.

“We have great staff, and we have fun when we get together.

“That was one of our objectives from the start.”

Not everything has worked, and AMPS has learnt to avoid trying too many things at once. It has exited its unsuccessful venture into container packing.

AMPS broking division was also mothballed last year because of the drought in north-west NSW which caused a massive drop in the region’s grain production.

Mr Brownhill said AMPS’ way forward had shown that investment in research leads to investor learning, and that farmers learn from each other, as well as from AMPS and other organisations’ results.