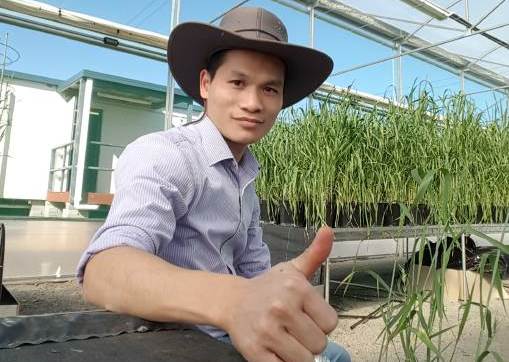 The finding could have great implications in the fight against rust disease, which decreases global food production by at least 10 percent.

Rust is a disease-causing fungus that afflicts various cereal crops worldwide, decreasing food production by at least 10 percent. In Australia, rust in wheat and barley costs farmers $350 million per year in lost production and fungicides.

Researchers have been aware of the gene, known as Rph3, for more than 50 years.

The gene was previously used in Australia to protect barley crops against leaf rust but was overcome by the development of a new strain of the leaf rust pathogen in 2009.

Nevertheless, understanding the gene and how it once protected barley could help control the disease better in future.

The finding has been published in the journal, Nature Communications.

“Plants and their pathogens generally co-evolve over time. It’s similar to the way bacteria develop resistance to antibiotics. It’s like an arms race,” said Professor Robert Park, who was Dr Dinh’s PhD supervisor.

“In this case, even though the rust fungus had defeated the resistance gene, we wanted to understand how the gene worked, to see if it could be deployed with other genes, or even if its sequence could be altered to be made effective again.”

“Hoan undertook painstaking work over three years to isolate the gene from the barley genome, which is about the same size as the human genome.

“He found that the Rph3 gene is a new class of resistance gene in plants generally, which has led our research in a new direction that we think will advance rust resistance.”

The results were so remarkable that Dr Dinh initially worried he had made a mistake.

“When I first found the gene, I was worried I had done something wrong because it was so unusual,” Dr Dinh said.

“The majority of disease resistance genes belong to a different gene family. It felt great to be vindicated.”

The use of resistance genes in crop species such as wheat and barley has long been considered the most cost-effective and environmentally friendly method of preventing rust outbreaks.

These pathogens spread over thousands of kilometres and have caused huge epidemics that have resulted in hundreds of millions of dollars in damage.

While they continue to have an impact on production, it has been estimated that genetic resistance saves Australian wheat and barley growers more than $1 billion every year.

Professor Park is a global leader in rust research from the University of Sydney’s Plant Breeding Institute, says that to date, 28 rust-resistance genes in barley have been identified worldwide.

Only four of these have been isolated so far, three, including Rph3, by the Plant Breeding Institute.

Dr Dinh’s research was funded by the Grains Research and Development Corporation; the Gatsby Foundation; and an Australian Awards Scholarship.

In 2015, Dr Dinh obtained an AusAID scholarship, now called an Australia Award Scholarship, to his first study choice, the University of Sydney.

Born in rural Vietnam, he has always been interested in studying agriculture as a means of helping farmers.

Dr Dinh’s knowledge of plant gene isolation also applies to crops including soybeans which are grown in Vietnam, where barley is produced

Dr Dinh is currently in Japan, about to commence a year-long postdoctoral position to explore how to enhance soybean productivity.

There is more research to be done into barley rust resistance genes and Dr Dinh hopes to continue this work.

“We need to know how the gene and the pathogen interact,” he said. “The story has just started.”

Dr Dinh is one of several University of Sydney alumni from the developing world to have a huge impact on improving agriculture.

The group includes the late, India-born Dr Sanjaya Rajaram, who completed a PhD at the University of Sydney in 1969 and won the World Food Prize in 2014 – ‘the Nobel Prize of agriculture’ – for his research into the development of 480 wheat varieties.

Source: University of Sydney
Grain Central: Get our free news straight to your inbox – Click here