Plants ‘order in’ nutrients to meet their needs Rice University graduate student Ilenne Del Valle, left, and biogeochemist Caroline Masiello oversee an experiment during their study of how plants communicate with microbes in soil and how organic carbon in soil can block signals in ways that ultimately benefit plants. (Photot: Jeff Fitlow/Rice University)

THE next time you’re thinking about whether to cook dinner or order a pizza for delivery, think of this: Plants have been doing pretty much the same thing for eons.

Researchers in the United States at Rice University’s Systems, Synthetic and Physical Biology program, Houston, detailed how plants have evolved to call for nutrients, using convenient bacteria as a delivery service.

Their open-access report in Science Advances looks at how plants read the local environment and, when necessary, make and release molecules called flavonoids. These molecules attract microbes that infect the plants and form nitrogen nodules — where food is generated — at their roots.

When nitrogen is present and available, plants don’t need to order in. Their ability to sense the presence of a nearby slow-release nitrogen source, organic carbon, is the key.

“It’s a gorgeous example of evolution: Plants change a couple of (oxygen/hydrogen) groups here and there in the flavonoid, and this allows them to use soil conditions to control which microbes they talk to,” Rice biogeochemist and co-author of the study Caroline Masiello, said.

The Rice team, in collaboration with researchers at Cornell University, specifically analysed how flavonoids mediate interactions between plants and microbes depending on the presence of abiotic (nonliving) carbon. Their experiments revealed, to their surprise, that an excess of dissolved — rather than solid — carbon in soil effectively quenches flavonoid signals. 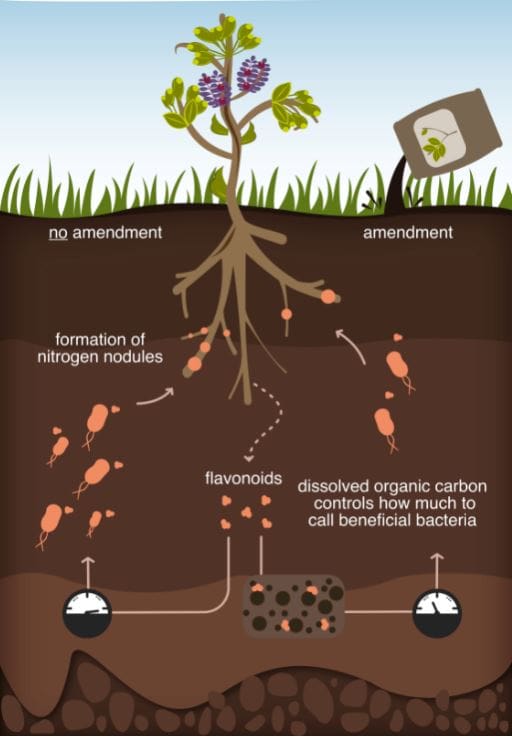 Understanding how carbon in soil affects these signals may provide a way to engineer beneficial interactions between plants and microbes and to design effective soil amendments (additives that balance deficiencies in soil), according to the researchers.

Plants use flavonoids as a defence mechanism against root pathogens and could manipulate the organic carbon they produce to interfere with signalling between microbes and other plants that compete for the same nutrients.

Overall, they showed that higher organic carbon levels in soil repressed flavonoid signals by up to 98 per cent. In one set of experiments, interrupting the signals between legume plants and microbes sharply cut the formation of nitrogen nodules.

Rice graduate student Ilenne Del Valle began the study when she became interested in the subtle differences between the thousands of flavonoids and how they influence connections between plants and microbes in soil.

“We had studied how different soil amendments change how microbes communicate with one another,” said Del Valle, co-lead author of the paper with former Cornell postdoctoral associate Tara Webster.

“The next question was whether this was happening when the microbes communicate with plants.

“We knew that plants modulate symbiosis with microbes through flavonoid molecules.

“So we wanted to learn how flavonoids interact with soil amendments used for different purposes in agriculture.”

Because she counts two Rice professors — Masiello and synthetic biologist Joff Silberg — as her advisers, she had access to tools from both disciplines to discover the mechanisms behind those subtleties.

“We came into this thinking there was going to be a big effect from biochar,” Silberg said.

“Biochar is charcoal made for agricultural amendment, and it is well-known to affect microbe-microbe signals. It has a lot of surface area, and flavonoids look sticky, too. People thought they would stick to the biochar.

“They didn’t. Instead, we found that dissolved carbon moving through water in the soil was affecting signals. It was very different from all of our expectations.”

The Rice and Cornell team set up experiments with soils from meadows, farms and forests and then mixed in three slightly different flavonoids: naringenin, quercetin and luteolin.

They found the most dramatic effects when dissolved carbons derived from plant matter or compost were present.

Plants employ naringenin, a variant of the flavonoid that gives grapefruit its bitter taste, and luteolin, expressed by leaves and many vegetables, to call for microbial nitrogen fixation.

These were most curtailed in their ability to find microbes.

Quercetin, also found in foods like kale and red onions and used for defence against pests, did not suffer the same fate.

Masiello noted there’s a cost for plants to connect with microbes in the soil.

“These relationships with symbionts are metabolically costly,” she said.

“Plants have to pay the microbes in photosynthesised sugar, and in exchange the microbes mine the soil for nutrients. Microbial symbionts can be really expensive subcontractors, sometimes taking a significant fraction of a plant’s photosynthate.

“What Ilenne and Tara have shown is one mechanism through which plants can control whether they invest in expensive symbionts.

“Among a wide class of signaling compounds used by plants for many purposes, one specific signal related to nutrients is shut off by high soil organic matter, which is a slow-release source of nutrients. The plant signal that says ‘come live with us’ doesn’t get through.

“This is good for plants because it means they don’t waste photosynthate supporting microbial help they don’t need. Ilenne and Tara have also shown that signals used for other purposes are slightly chemically modified so their transmission is not affected at the same rate.”

The researchers checked flavonoid concentrations in soil with standard chromatography as well as unique fluorescent and gas biosensors, genetically modified microbes introduced in 2016 with the support of a Keck Foundation grant, which also backed the current project.

The microbes release a gas when they sense a particular microbial interaction in opaque materials like soil.

“The gas sensor ended up being very useful in experiments that looked like tea, where we couldn’t image fluorescent signals,” Silberg said.