Scientists use light pulses to build drought resistance in plants

PLANTS have microscopically small pores on the surface of their leaves, the stomata. With their help, they regulate the influx of carbon dioxide for photosynthesis.

They also use the stomata to prevent the loss of too much water and withering away during drought. 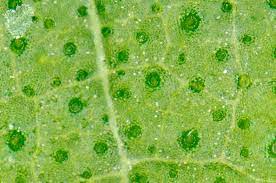 The stomatal pores are surrounded by two guard cells.

If the internal pressure of these cells drops, they slacken and close the pore.

If the pressure rises, the cells move apart and the pore widens.

The stomatal movements are thus regulated by the guard cells.

Signalling pathways in these cells are so complex that it is difficult for humans to intervene with them directly.

However, researchers of the Julius-Maximilians-Universität (JMU) Würzburg in Bavaria, Germany, nevertheless found a way to control the movements of stomata remotely – using light pulses.

The researchers succeeded in doing this by introducing a light-sensitive switch into the guard cells of tobacco plants.

This technology was adopted from optogenetics. It has been successfully exploited in animal cells, but the application in plant cells is still in its infancy.

The group used a light-sensitive protein from the alga Guillardia theta as a light switch, namely the anion channel ACR1 from the group of channelrhodopsins.

In response to light pulses, the switch ensures that chloride flows out of the guard cells and potassium follows.

The guard cells lose internal pressure, slacken and the pore closes within 15 minutes.

“The light pulse is like a remote control for the movement of the stomata,” Hedrich said.

“By exposing ACR1 to light, we have bridged the cell’s own signalling chain, thus proving the hypothesis that the opening of anion channels is essential and sufficient for stomatal closure.”

Hedrich said the exposure to light had almost completely prevented the transpiration of the plants.

With this knowledge, it is now possible to cultivate plants with an increased number of anion channels in the guard cells.

Plants equipped in this way should close their stomata more quickly in response to approaching heat waves and thus be better able to cope with periods of drought.

“Plant anion channels are activated during stress; this process is dependent on calcium. In a follow up optogenetics project, we want to use calcium-conducting channelrhodopsins to specifically allow calcium to flow into the guard cells cell through exposure to light and to understand the mechanism of anion channel activation in detail,” Hedrich said.

Basic scientific research can also benefit from the results from Würzburg: “Our new optogenetic tool has enormous potential for research,” he said.

“With it, we can gain new insights into how plants regulate their water consumption and how carbon dioxide fixation and stomatal movements are coupled.”