AUSTRALIAN cropping exports declined in value for the second consecutive year in 2018/19, primarily as a result of lower production which reduced exportable supplies, according to Rural Bank’s Australian Agriculture Trade 2018/19 report.

Western Australia was the exception to this national trend as timely growing season rain fuelled record crop production and a 37.3 per cent rise in export volume.

The significant decline in legume exports was affected by both dry conditions and a reduction in area planted in response to tariffs on exports to India.

Another below average Australian crop is expected in 2019/20, which will again result in low volumes available for exports in the coming year.

Compounding the effect of expected low production, the USDA is forecasting record global wheat production and above average global barley production in 2019. 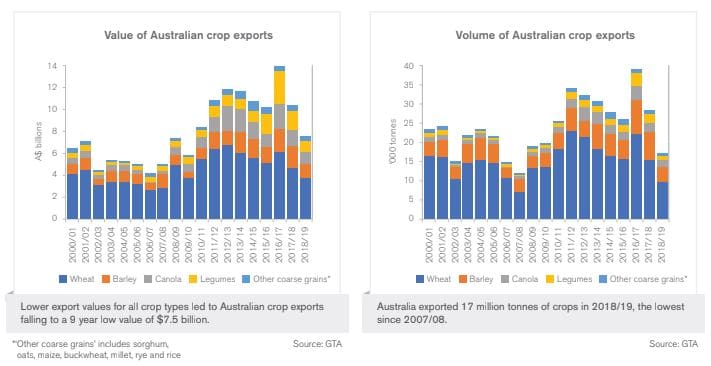 The Rural Bank report found Australian cotton exports increased in volume as a drawdown of carry in stocks offset a 54pc decline in production.

Lower production occurred due to a decline in the area of cotton planted in response to dry conditions in New South Wales and Queensland during planting and lower water availability for irrigation.

Australian cotton stocks are estimated to have declined by 6.2pc in 2018/19 to offset lower production and meet increased export demand.

In addition to increased volume, an increase in the average export price was a stronger factor in the increased export value of Australian cotton.

Prices responded to lower production and firmer demand and remained above the five-year average for most of the financial year.

Demand for Australian cotton improved in 2018/19, largely as a result of increased import demand from China and improved competitiveness into China following the implementation of a tariff of 25pc on United States cotton in July 2018.

The value of Australian cotton exports is expected to decline in 2019/20 due to a further decline in domestic production.

The continuation of dry conditions in Australia’s cotton growing regions and sustained high water prices are likely to result in another reduction in the area planted to cotton in 2019.

This will reduce the volume available for export, with stocks to supplement some supply to export markets.

The value of Australian sugar exports grew in 2018/19 as a higher average export price offset a lower volume of exports.

A global oversupply of sugar has driven international prices lower since late 2016 as record high production has exceeded consumption and caused an accumulation of stocks.

Subsidised production in India has been a key factor in the increased supply and has prompted a joint challenge to the World Trade Organisation by Australia, Brazil and Guatemala.

The supply and demand imbalance improved slightly in 2018/19 but a further reduction in international prices suggests supply still exceeded demand.

There were signs for improved balance in global supply and demand in 2019/20 which would have likely led to an improvement in prices, however India’s decision to provide subsidies that incentivise exports in order to reduce stocks is now likely to extend the oversupply of sugar in global markets and supress prices further.

Australian sugar production is expected to decline slightly in 2019/20 due to unfavourable weather conditions and uncertain market conditions.

A lower volume of exports and a continuation of low prices is expected result in a year-on-year decline in export value for Australian sugar in 2019/20.

Overall, Australian agricultural exports have increased in value for the ninth consecutive year to a record high of $50.7 billion.

The cattle industry experienced the largest increase in export value growth in 2018/19, up by $1.9 billion to a whopping $12.3 billion, a bittersweet result given the drought-induced destocking activity, which resulted in increased production.

On the horticulture front, nuts led the way achieving a rise in export value growth of 39.1 per cent, followed by fruit (22.1 per cent) and vegetables (18.4 per cent).

“Moving into 2019/20, some commodities will continue to be challenged by the impacts of drought and global economic uncertainty.

“While demand for Australian agricultural exports remains positive, supply challenges, particularly for cattle, sheep and wool due to poor seasonal conditions, will limit production and therefore export volumes in 2019/20.

“We expect the Australian agricultural export value to remain steady, with cropping exports offsetting the decline in the livestock sector.”