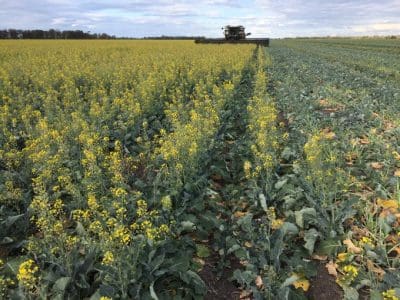 VOLUME in the nearby grain market has slowed to a trickle in New South Wales as traders wait to learn the fate of struggling crops, while Victorian growers wind up current-crop sales on the collapsing inverse, and book some new-crop tonnage also.

In the September-October Brisbane free-on-truck (FOT) market, Western Australian wheat has dropped $5-$10 per tonne in the past week to around $386-$388/t, with barley continuing to hold its premium in the current-crop market.

These prices are considerably softer than last week’s, with barley down $5/t, and wheat more like $15/t.

On the Western Downs of southern Queensland, new-crop Central Queensland (CQ) wheat for feedlot use has been booked at $420/t for October-November delivery, which supports on-farm prices of $350-$370/t, depending on the freight differential.

CQ sorghum from the Central Highlands has traded recently at $305-$307/t on-farm, and is working into CQ and north Queensland rations rather than coming south on to the Downs.

ADM regional grain accumulation manager Peter Dorney said a number of crops in north-west NSW, including some in the prized Croppa Creek and North Star districts, were being cut for hay.

“They were knee high and looking good six weeks ago, but there’s no moisture under them,” Mr Dorney said.

“In a normal year, those crops would yield 5t per hectare of grain; not this year.”

As feedlotters and graziers in northern NSW and border areas continue to scramble for hay, the roughage value of below-average crops appears to be exceeding their grain value, especially after some minor frost damage in recent weeks.

Hay in drought-affected parts of NSW and into southern Queensland has been fetching $500/t or more.

Trade sources say many NSW crops north and west of Young could well be cut for hay if no significant rain falls by mid-September, but some are too spindly to have the biomass to make the exercise worthwhile.

“Their yield potential’s going backwards, and everywhere needs a drink,” he said.

“We’ve had a few frosts, and any smaller crops that don’t have their roots well down are really going to hurt it we get the warm weather that’s forecast for next week.”

Mr McKinnon said the trade was seeing some current-crop selling of wheat and barley out of Victoria from growers who were switching their attention to new-crop, and wanted to make the most of the decreasing inverse before current and new-crop prices converged.

“The cash market’s quiet and values have dropped a little bit in the past week with Victoria selling some old-crop.

“Just about everyone’s covered until new-crop.”

Yield prospects for crops in Victoria’s north-west corner are below average, but Victoria’s other districts are looking at average or above-average yield prospects, as are the southern slopes and inner south-west slopes of NSW.

However, all regions have limited subsoil, and traders are being careful not to short themselves on new-crop in case adverse spring weather pummels production prospects.

At Temora, trader Bill Preston said farmers in the wider district had opened the gate to let sheep into canola crops.

“Since last Saturday, everything’s just gone off with some frost damage and wind with no rain,” Mr Preston said.

“It hasn’t been enough to keep a lot of crops going.”

Mr Preston said crops would not be cut for hay until the weather warmed up next month.

In the current-crop market, wheat and barley have been trading in small amounts in southern NSW at $340/t ex site, which Mr Preston said was about $100/t below values at this time last year.

“It’s because sheep numbers are back.

“A lot of people have got rid of a lot of stock, even going up into the hills.”

In cottonseed markets the price direction continued firmer as small volumes came to market and buyers willing to pay were few.

ASX wheat futures activity grew this week and the number of barley trades shrank; wheat and barley prices recovered late in the week after dipping early.

Open interest on Wednesday had risen slightly to 1342 lots.