FEEDGRAIN values in Victoria and southern New South Wales have jumped by up to $15 per tonne in the past week in response to frosts and dry weather which have depleted yield prospects in some areas. 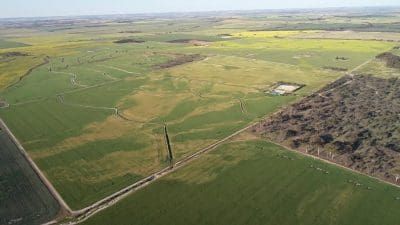 Jack Frost has left his mark in this barley crop at Babakin in WA’s southern central wheatbelt. Photo: Brendan Boyd

This means a greater proportion of crops, particularly canola, are being cut for hay, and the impact of weekend frosts in Western Australia has further tightened the national supply of grain.

Agfarm account manager for southern NSW, Matt Noonan, said consumers and graziers were buying grain hand-to-mouth as they waited for the yield prospects of cereal crops to be determined by weather in coming weeks.

“Strength in the ASX, wash-outs on wheat and barley contracts, frost fears in WA, and a lack of rain for the current crop have all put another rocket under the market this week,” Mr Noonan said.

Many paddocks of canola, some with yield prospects of 0.3 tonnes per hectare or less, are being cut for hay, and Farm Tender online broker, Dwain Duxson, said dry conditions in northern Victoria and southern NSW were “spreading dramatically”.

“There’s a hell of a lot of canola being cut for hay in southern NSW and in Victoria,” Mr Duxson said.

With three weeks between slashing and baling, canola hay was not expected to hit the market in any volume until next month, and some growers would be keeping it to feed to stock over spring and summer.

Feed wheat and barley ex farm in Victoria are currently available at $400-$430/t, depending on grade, volume and location, and grain coming in by ship to Port Kembla, as well as Newcastle and Brisbane, is helping to put a lid on values.

Stable in the north

Major consumers and feedlots in southern Queensland and northern NSW have enacted their strategy of buying grain for the remainder of calendar 2018 based on supply from WA and South Australia.

Robinson Grain Toowoomba-based commodity trader, Anthony Furse, said WA conditions needed watching because lighter areas of the state were in need of rain, and frost had also had an impact.

“It’s easier for the WA crop to get smaller than it is to get bigger,” Mr Furse said.

With minimal winter crop on the Darling Downs and the Queensland-NSW border region, northern eyes remained fixed on hopes for a big sorghum crop.

“Sorghum values are still a function of the wheat price and, depending on the rain situation here in the next few weeks, sorghum could start to run its own race.

“We look like getting through the whole of September without a drop of rain.”

Mr Furse said sorghum was being looked to as a key ingredient in the feed matrix for next year, and the window for planting the early crop was now open.

“If growers miss this window, then the next window is more like December or January, but by then growers might be motivated to fallow through to new-crop winter planting and take advantage of the price spread of around $60/t between wheat and sorghum.”

Darling Downs January wheat is quoted at around $450/t, with barley nominally a few dollars below that.

“There’s not much buying activity among feedlots, except where they need to fill holes, and forage is basically on the same track.

“Cottonseed, even after the last rain front that came through, was well into the $700/t mark, but it’s come back about $60/t.

“The added benefit of cottonseed, even at those prices, is that it reduces the amount of forage a feedlot needs to find.”