PLANS for the development of a 60,000-tonne grower-owned grain receival site in the central Victorian town of Bridgewater on Loddon are attracting plenty of interest following an initial grower meeting held this week. 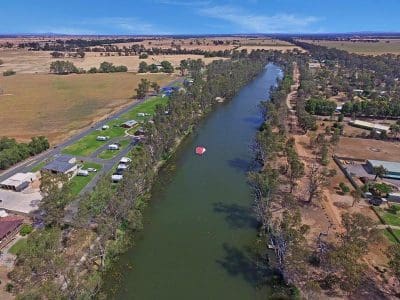 Bridgewater-based transport operator, Brendan Maher, is a key driver of the potential development, which he said could deliver savings to growers because of its location, and flexibility in operation.

“We’ve had one meeting and got great support from around 40 growers, and we’re having another on 10 October,” Mr Maher said.

Growers in the Loddon Valley, northwest of Bendigo, have had one less option for delivery of grain since GrainCorp announced in 2014 it would no longer be receiving grain at its Bridgewater site.

While domestic customers like Hazeldenes poultry and Southern Stockfeeds take a chunk of the region’s grain, Mr Maher said a facility like the one being proposed would give growers and traders better access to export markets also.

“We’re looking at a $4.50/tonne freight differential advantage compared with GrainCorp at Mitiamo, and at around 173 kilometres, we’ll be the same distance as the GrainCorp site at Dunolly from Melbourne,” Mr Maher said.

“We see ourselves as being able to supply maybe 10,000t at a time through road transport to meet a vessel coming into Melbourne or Geelong.”

Mr Maher said barley, canola and wheat in various segregations were likely to be commodities handled at the facility.

“It’s a very secure grain-growing area here; when the Mallee’s struggling, we still seem to do alright.

“Our location, and the crops we grow, are giving us some good opportunities.”

Funding and operation of the Bridgewater facility has been modelled on the nearby Boort Grain Co-op, which last year handled 170,000t of grain.

Mr Maher said the site was likely to draw grain, and grower investment, from a large area which included East Loddon, Jarklin, Raywood and Wedderburn.

“We can go a long way before we start to impact on GrainCorp or Emerald Grain at Elmore.”

Victorian transport regulator, Vicroads, has recently granted permission for A-double trucks to be operated on designated routes in Victoria.

“That is in effect a 30-metre road train with a legal payload of 68t; it’s only on certain routes, but Vicroads seems to be opening up more spaces for them as they assess things like weight limits on bridges.”

He said the site being considered would have rail access, but road was likely to be more convenient and economical.

“If you’re closer than about 300km to the port, road seems to be the best option.”

He said a container-packing facility could in time be added to the site.

“I can see efficiencies in containerising grain on-site because you’re not going to be double-handling it.

“I reckon someone can make a go of this; it’s something that can grow, and I see it as a big thing for the community.

“The potential for this site to work lies in the convenience it can give to growers wanting to deliver, and the better margin it can offer people buying or selling grain out of it.”

The reintroduction of a receival site at Bridgewater was seen as having the potential to halve the time some growers spent on the road delivering grain.