THE INDONESIA Government last week ratified the Indonesia-Australia Comprehensive Economic Partnership Agreement (IA-CEPA) to remove the last official hurdle in the bilateral pact which will create a new market for Australian feedgrain.

The move follows the Australian Government’s ratification of the pact last year, and has been welcomed by Australian grains-industry representative GrainGrowers.

“Australia will be the first country in the world for a number of years to get import permits for feedgrain,” Mr McKeon said of the Indonesia market.

“The starting point is 500,000 tonnes, and there will be a five-per-cent growth year on year from there.”

However, Australian wheat sales to Indonesia in 2018 and 2019 were reduced by the impact of drought on the national export surplus, and increased competition from other suppliers.

With recent rain bolstering prospects for feedgrain and milling wheat crops to be planted in many Australian cropping districts, the ratification of the IA-CEPA has been ideally timed.

“In 2019 we had a really small east-coast crop, but we’ve had a great start to the year, and the best thing is we can deliver is great export markets for our growers to get their grain into.”

GrainGrowers understands the feedgrain quota from Indonesia is open to barley, feed wheat and sorghum, and tonnage will be used primarily in the poultry sector to supplement Indonesia’s domestic supply of corn. 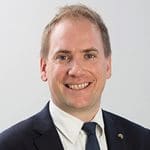 It will provide technical support to Indonesia’s stockfeed and livestock industries to help maximise results from rations which include Australian feedgrains, and also covers human-consumption markets.

“The grains partnership will help with feed and milling wheat in a new approach.”

In a statement, GrainGrowers chairman Brett Hosking said the organisation was grateful for the Australian Government’s efforts in delivering IA-CEPA.

“We are looking forward to working with our Indonesian colleagues and gratefully acknowledge the contributions of many organisations whose hard work has supported the ratification of IA-CEPA.”