RAIL blockades across Canada continue to paralyse grain movements, leaving export grain stranded on the nation’s Prairies and slashing grain export income by as much as US$7 million per day from lost sales, contract penalties and demurrage. 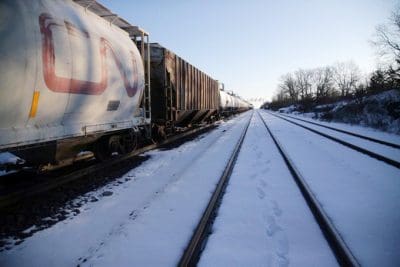 Canadian rail services are being disrupted by blockades on tracks. Photo: Canadian Federation of Agriculture

In early February protesters set up blockades east of Belleville, Ontario, and west of Prince George, British Columbia in solidarity with Indigenous leaders from the Wet’suwet’en Nation who oppose construction of a natural gas pipeline. Wet’suwet’en chiefs claim the proposed pipeline would run through the hereditary land of their people.

The blockades have since sprung up at several strategic locations across the country disrupting most key rail corridors bringing both passenger and freight train services to a grinding halt.

They have cut off critical crude-by-rail shipments to three eastern refineries that account for about a third of the country’s refining capacity. And farmers who rely on propane to heat livestock barns during the winter and keep animals comfortable are having to ration their supplies because of the blockades.

The dispute has struck a chord across the country and led to widespread protests that are about far more than the future of a single pipeline. It is giving voice to those who believe the Trudeau government is not delivering on its pledges to take climate change more seriously and transform its relationship with Canada’s indigenous people, who make up about 5 per cent (pc) of the population.

This is the latest crisis to face Justin Trudeau at the start of his second term as Canadian prime minister. After spending days calling for talks and making clear he didn’t want police to dismantle the blockades by force, Trudeau’s tone hardened late last week. He demanded aboriginal protesters lift the rail blockades that are hurting the economy and made it clear police would, if necessary, enforce injunctions to remove the obstacles.

About 94pc of Canada’s annual grain exports travel to port by rail. The blockades are further impeding grain shipments that already faced severe backlogs stemming from a delayed harvest and a week-long strike at the Canadian National Railway Company back in November last year.

According to data released by the Canadian government last Friday, wheat exports from all ports were less than 174,000t in the week concluding Sunday February 16, down 37pc compared to the previous week and 28pc below the five-year average. Shipments of wheat from Vancouver, Canada’s main grain export hub, fell 68pc to 44,200t while exports from Prince Rupert decreased from 77,000t to zero.

The latest weekly grain monitoring report stated there were 40 vessels lined up at the port of Vancouver and 10 at Prince Rupert as of February 16. The Vancouver line-up compares with the average of 24 vessels for the port, while the yearly average at Prince Rupert is only five. Eight grain vessels were cleared to sail from Vancouver in week 29 of the Canadian grain shipping calendar, but none from Prince Rupert.

The blockades are not only disrupting the passage of grain to port for export but seriously impeding each rail company’s ability to reposition empty rail cars back upcountry for loading. This has led to a sharp increase in upcountry elevator stocks. Growers have been delivering as arranged with exporters, but the grain is not being railed out of the sites at the same pace.

The effects on the Canadian farmer is real. As elevators fill up, growers have to stop delivering, and they don’t get paid when they are unable to deliver their grain. This may lead to a financial squeeze as farmers need the money to cover the costs to seed and fertilise the upcoming spring crop,

The ships currently waiting at anchorage put the 2019/20 shipping season on track to match the disastrous winter of 2013-14 for grain shipments. Agriculture and Agri-Food Canada’s February supply and demand estimates included a 400,000t drop in exports of the grains and oilseeds for 2019-20.

The blockade comes at a time when grain sales, in particular wheat, have been booming into Asia. Canadian wheat sales to China were at a 14-year high in 2018/19, and the trend has continued this season. This is in stark contrast to canola, where the continuing trade dispute between the two countries has stymied the traditional trade flow.

The increased wheat enquiry from China is really by necessity. China needs to fill a void created by the long-running trade war with the United States and lower than normal exportable surpluses out of Australia after back-to-back droughts on the east coast. They have also purchased French wheat in recent weeks.

Sales of Canadian wheat have also been increasing to countries such as Indonesia, Philippines, Thailand, Vietnam and South Korea. The dynamic has changed to such an extent that in the 2019/20 marketing year Indonesia was Canada’s biggest global wheat customer. Their exports to Indonesia totalled 2.28Mt, almost double Australia’s shipments to the same destination.

Sales of Australian wheat to China have continued in recent weeks. However, with a smaller exportable surplus this season compared to last, the cupboard will be empty very quickly. This will frustrate our ability to take advantage of Canada’s grain export woes and claw back traditional Asian demand, particularly for Australian wheat.