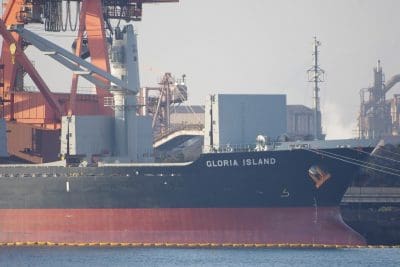 New season grain exports have commenced in South Australia with one of the first shipments for 2016/17 being loaded by Glencore Grain this week.

About 20,000 tons of wheat is being loaded onto the Gloria Island at Viterra’s Thevenard terminal, bound for Indonesia.

Mr Hughes said exporting grain was critical at this time of year to connect growers and international customers.

Harvest shipping benefitted growers as it kept the supply chain moving and met a peak demand period for end-use customers.

Glencore Grain has secured a lot of harvest shipping capacity from South Australia and other states which it says will assist greatly in keeping the supply chain operating efficiently over the harvest period, particularly with the big crop that has now started to be received.

Mr Hughes said the introduction of long-term agreements (LTAs) in South Australia this year had been very positive for exporters when booking shipping capacity.

LTAs had helped South Australia to compete with other origins to attract grain exports, which ultimately benefitted growers, he said.

“We also have greater certainty of shipments which help when dealing with end-use customers,”

The CBH Group has also successfully launched its new Direct to Vessel service with high demand from growers wanting to take part, as reported yesterday.

Since nominations for the service opened in October, more than 110 growers across the Geraldton and Esperance zones in Western Australia have taken part in delivering and nominating to CBH Marketing and Trading through Direct to Vessel opportunities.

Since Glencore’s first new crop chickpea vessel sailed in October from Central Queensland’s port of Mackay, a constant stream of vessels has been making calls at Mackay, Gladstone and Brisbane.

Australia will export around 250,000 mt of new season desi chickpea in bulk vessels to the sub-continent by Christmas.