Queensland recorded the largest rise in bulk exports for 2021-22, up 201pc on average. The Port of Brisbane is the centre for grain exports in the state. Photo: Port of Brisbane

AUSTRALIA’S bulk grain exports were 40.6 million tonnes (Mt) in the year to September 30, and exceeded the previous season’s record by 22pc, according to the Australian Competition and Consumer Commission’s Bulk grain ports monitoring report published today.

“Two consecutive seasons of record high-volume harvests created strong demand for export services, and most grain export terminals experienced either the same level or an increase in the number of exporters using their facilities compared to the previous year,” ACCC deputy chair Mick Keogh said.

SA was the only state that did not have a facility exceed its stated or estimated capacity. 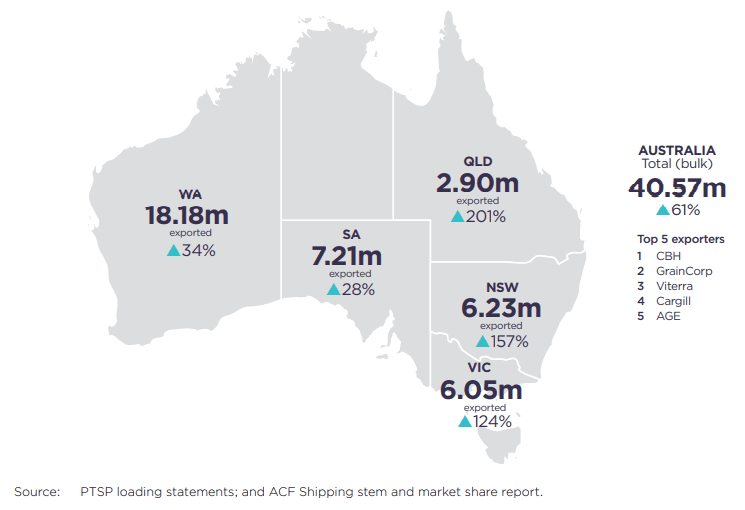 A record number of 32 exporters participated in the national bulk grain export market in 2021–22, including two new mobile loader operations.

Exporters shipped bulk grain from all 31 operational facilities across Australia, and recent entry into the PTSP market meant that there was more capacity again this year on offer to facilitate the record shipment levels.

However, several facilities are predominantly being used by a small number of exporters.

There were nine new entrant exporters, including Australian-Asian Agricultural Exports that exported close to 400,000t from CBH’s WA facilities in its first year.

While new entrants mostly shipped relatively few shipments each, in total they exported 1.6Mt of grain, or 4pc of national shipments.

The two new mobile loader operations in 2021-22 both entered the market at Brisbane, likely in response to the record demand for shipping capacity.

The lower upfront and capital costs of mobile ship-loading operations has reduced the barriers to entry in some markets for bulk grain port terminal services.

In SA, T-Ports is also planning to begin export operations at Wallaroo in mid-2023 using its transhipment vessel, another novel form of entry into a traditionally capital-intensive market.

“While additional bulk export facilities were a welcome development, it is unclear whether the recent increase in the number of port terminal services providers and exporters will prove to be a long-term trend.”

The ACCC has observed a trend of increasing production and export of non-wheat grain, driven by factors such as increasing barley yields and dual-purpose cropping.

This trend was not observed in 2020-21 as the then record wheat crop drove up the proportion of bulk wheat exports to 62pc.

Non-wheat exports accounted for 41pc of bulk grain exports in 2021-22, which is one percentage point above average.

Canola accounted for 14pc of bulk grain exports, 4pc above average, most likely driven by the record canola production in 2021-22.

The ACCC notes that the mix of grain production and exports each year is influenced by many factors including global grain prices and tariffs.