CHANGING diets and urbanisation are among the factors which are forecast to make Southeast Asia and Sub-Saharan African the world’s largest wheat-importing regions, according to a United States Department of Agriculture (USDA) release overnight.

After continued growth over the past decade, Southeast Asia on 29 million tonnes (Mt) and Sub-Saharan Africa on 27Mt are forecast in 2018/19 to eclipse previous front-runners, North Africa and the Middle East, chart 1. 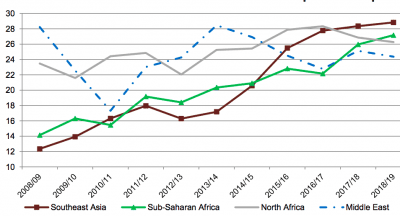 The USDA report said Southeast Asia and Sub-Saharan Africa have developed a fondness for diets that include more wheat, which has been driving import demand.

The fast growth of imports by Southeast Asia has also been fuelled by increased utilisation of wheat in feed rations, while Sub-Saharan Africa’s growth is mainly supported by rapid population growth and urbanisation.

Historically, North Africa and the Middle East were the largest regions for global wheat imports.

In the last decade, however, consumption in those regions has not grown as rapidly as in Southeast Asia and Sub-Saharan Africa.

In 2018/19, North Africa is forecast to have reduced wheat imports due to bumper crops in its key importing countries, namely Algeria, Morocco, and Tunisia.

Imports for the Middle East are also forecast to drop as reduced demand from Turkey is expected to more than offset higher imports in other nations in the region.

Turkey’s import demand is down based on its own bumper crop, ample stocks, and lower re-exports of wheat flour.

This shifting global trade dynamic has impacted on competition between global wheat exporters.

The European Union and Russia have become the world’s leading wheat suppliers, taking advantage of their large supplies and competitive pricing, as well as geographical proximity to major markets in Africa and the Middle East.

In years when those exporters have bumper crops, they extend their customer base to Southeast Asian markets.

Historically, Australia, Canada, and the United States are the major exporters of milling wheat to Southeast Asia.

Ukraine has expanded its exports to the region as well, becoming a major supplier of feed-quality wheat.

In recent years, Argentina has shipped wheat to Southeast Asia as well as Africa, as its prices are very competitive in its peak export months of December to March.