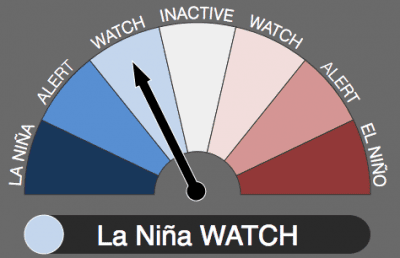 The El Niño Southern Oscillation (ENSO) is currently neutral, however, the Bureau of Meteorology says the chances of a La Nina forming this summer have increased.

In its latest ENSO update released this week, the Bureau says models suggest the tropical Pacific Ocean will continue to cool, making the chance of a La Niña forming in late 2017 at least 50 percent; around double the normal likelihood.

However, while this means the Bureau’s ENSO Outlook has shifted to La Niña WATCH, rainfall outlooks remain neutral due to competing climate drivers.

Following a brief period of warming, tropical Pacific surface waters cooled significantly in the past fortnight, and hence the central to eastern tropical Pacific Ocean is now generally cooler-than-average.

La Niña events typically bring above average rainfall to eastern Australia during late spring and summer. However, given the competing influence of other climate drivers (weakly warm waters to the north of Australia, and cooler waters in the eastern Indian Ocean), current climate outlooks do not favour widespread rainfall across Australia for November to January.