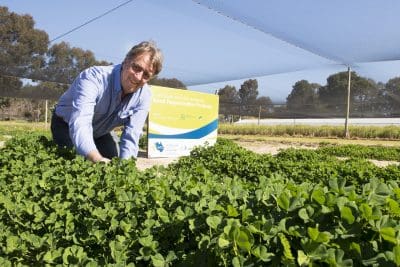 Seeds from pasture plants propagated by the Department of Agriculture and Food, Western Australia will be shipped for storage to an international seedbank in Norway to insure against the loss of plant germplasm during large scale regional or global crises.

The department has committed to an international seed conservation project, with seeds grown at the South Perth head office facility, eventually being stored in the Svalbard Global Seed Vault on the Norwegian island of Spitsbergen.

The seed vault is a secure seedbank located 120 metres inside a sandstone mountain on Spitsbergen Island, about 1300 kilometres from the North Pole.

A feasibility study prior to construction of the Svalbard Global Seed Vault determined that it could preserve most major food crops’ seeds for hundreds of years. Some, including important grains, could survive far longer – possibly thousands of years.

Department senior research officer Clinton Revell said the Australian commitment to contribute to this global resource was through the recently formed Australian Pastures Genebank (APG), managed by the South Australian Research and Development Institute in Adelaide.

“The department is regenerating the seed stocks of some important pasture cultivars and genebank accessions with funding from the APG and some of this seed will then be shipped to Norway,” Dr Revell said.

“Vault seed samples are duplicates of samples stored in the genebanks of donor countries like the APG. 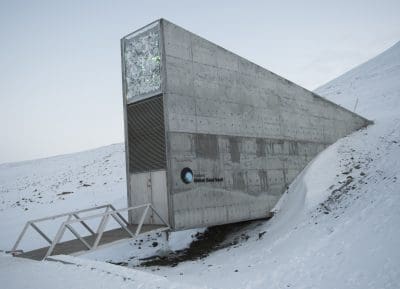 “The preservation of pasture germplasm in this way will ensure that such an important resource will always be available for WA livestock and grains industries to help meet future challenges, such as a drying climate.”

The APG operates under the framework of the International Treaty on Plant Genetic Resources for Food and Agriculture.

Its mandate includes all pasture and forage species of actual or potential value to Australian agriculture, which includes seeds intended to be grown for livestock, crop rotation and natural resource management.

The APG will make small quantities of mandated germplasm and related information available for food and agricultural:

Dr Revell said the department was transferring its large collection of Trifolium legumes, previously housed in the Australian Trifolium Genetic Resource Centre (ATGRC) at South Perth, to the APG as part of a national effort to consolidate genebanks in Australia.

“We have already transported 17,000 unique accessions of forage Trifolium species to the APG in the past 12 months, with a further 11,000 destined for shipment within the next year,” he said.

“As part of the APG operations, a National Seed Regeneration Program has been established with Western Australia nominated to handle the Mediterranean forage species primarily adapted to acidic soils.

“The immediate aim is to replenish fresh seed stocks of accessions that are at a high risk of being lost, due to low quantity and sub optimal seed quality.”

Dr Revell said 2000 subterranean clover lines had been identified in this category, and the first 200 of these were now being grown at the department’s South Perth plots.