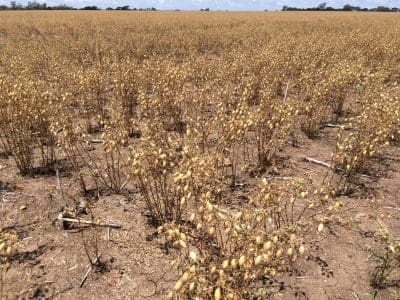 Initial indications are that average yields on slopes crops could exceed 1.5 tonnes per hectare, more than triple what many crops on the plains of north west NSW and throughout southern Queensland have achieved following the cruellest of growing seasons.

While the area planted in 2017 in Australia’s only Desi chickpea-producing states, NSW and Queensland, was similar to that of 2016, a dry winter, successive frosts, unseasonal heat, late rain and even some patchy hail have resulted in record low yields.

This was in contrast to last year’s record highs, which produced Australia’s biggest ever chickpea crop of 2.2Mt.

In Queensland, around 10 per cent of a total area forecast at 550,000 hectares remains to be harvested, while in NSW, roughly half the area estimated at around 450,000ha has been harvested.

Associated Grain accumulator, Pat O’Hara, at Dalby on southern Queensland’s Darling Downs, said an improvement in yield and quality was likely as harvest moved into its final third.

“In NSW districts like North Star, Pallamallawa and Terry Hie Hie down to Gunnedah, we can hope for something better than what we’ve seen so far,” Mr O’Hara said.

“Yields in those crops in later areas are the ones that will really be able to benefit from the rain last month.”

He said some Queensland crops planted in July and even early August had been saved by October rain following successive frost events followed by hot and dry conditions.

“That rain means those later crops have gone from yielding nothing to 0.7t/ha.

“I’ve been fairly buoyant on the crop at 1.1Mt, but I keep hearing about atrocious yields of 0.2-0.5t/ha time after time, and I can’t even see it being 1Mt.”

Pulse Australia’s most recent estimate put the chickpea crop now being harvested at 1.4Mt; word from within the organisation is its revised estimate due out this month will be at or below 1Mt.

B&W Rural Moree-based agronomist, Rob Long, has reported one of the best yields to come off to date outside Central Queensland (CQ), 1.7t/ha at Croppa Creek, and his North Star-based colleague, Leigh Norton, said crops on the ridges which escaped severe frost damage were yielding up to 2t/ha.

Mr Norton said frost-affected crops in low-lying areas had managed to stack on some yield potential with a late flowering prompted by around 120-140 millimetres of rain last month.

“Based on elevation, we’ve really got two crops here at the moment, and yields are looking like 1.2-1.6t/ha for both; some will go better than 1.6.”

Mr Norton said crops in the North Star and Yallaroi districts north-east of Moree were planted on a full profile of subsoil moisture, and the chickpea harvest was now about 30 per cent through.

Apart from some mould on early harvested crops, Mr Norton said the quality of chickpeas to date had been good, and the biggest challenge for growers was desiccating a crop with green pods which had set after the late flowering.

“We normally desiccate around here just for weeds, but this year it’s happening to shut the crop down, which is hard when it wants to fire up on this last rain.”

Mr O’Hara said chickpea crops in pockets of CQ had ranged from 0.8-2t/ha to average roughly 1.5t/ha, but many crops north and west of Moree and into southern Queensland had struggled to make 0.5t/ha.

“Some of those had frosts over six or seven weeks that couldn’t have come at a worse time; their flowers fell off four, five or even six times, and then they went headlong into a heatwave in the first half of September.”

On price and quality

Chickpeas delivered Downs straight off the header have traded to a high of around $880/t, well down on last year’s peak of $1200/t, which reflected the need for container packers to meet October and November vessels, and the lateness of the southern Queensland crop.

Trade sources have said rain on all but the earliest-harvested 2017 chickpeas in CQ has darkened and mottled most crops as a result of them receiving 60-220mm of rain at the point of harvest.

“There’s a lot of weathered grain coming in, and we’re seeing soil come in too from rain splash and dust, and because the crop has been so short,” Mr O’Hara said.

This means container packers are grading chickpeas to remove soil rather than frosted pods, most of which have fallen off in the paddock.

“The taste and quality of them won’t be affected, but they don’t look as good as the ones we were sending last year and we have had to alert our buyers on that.”

Mr O’Hara said prices for chickpeas delivered Downs had bouncing around the $750-$850/t range for the past two months, down from a pre-harvest high of $930/t.