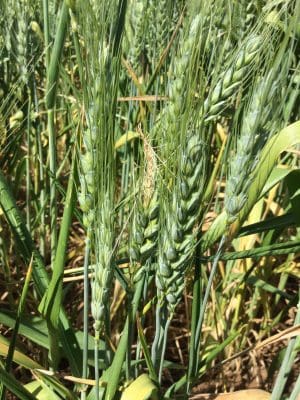 SOUTH-eastern Australia’s cropping season has been a tale of have and have nots.

A dry September has killed yield in some areas, while frosts have also taken their toll.

Yet much of Victoria looks like posting average yields unless there is a quick hot finish to the season.

While the dry September was not ideal, Mr Grey said crops had held on surprisingly well thanks to good subsoil moisture levels which allowed the crops to hold on.

There was frost damage across much of the state’s crops, but most would cost as little as 1 per cent yield. Isolated properties had sustained 20-40 per cent yield losses.

“I think Victoria will look like having an average yield across the state,” Mr Grey said.

“The spring has not been hot – we might have one hot day followed by cool change – and this has been ideal for grain filling.

“We certainly won’t be near last year’s record crop yields but many farmers will be harvesting average yields.”

In an area by area breakdown, Mr Grey made the following observations:

Southern Mallee – crops are looking better in this area than further north with good crops around Ouyen, Murrayville and Hopetoun. Barley crops have already ripened and lupins are turning. But in the south-east of the southern Mallee, some crops are still green thanks to more rain and high subsoil moisture levels. Crops in this region, from Swan Hill to Birchip to Sea Lake have the potential of 3 tonnes/hectare for wheat and barley.

Wimmera – there is some minor frost damage but overall crops are travelling well with many still green. About 10-15mm rain last week has been ideal, and wheat crops could yield 4-5 tonnes/hectare. The high levels of sub soil moisture have allowed crops to do well on average rain and there has not been a lot of heat damage thanks to the mild spring.

Southwest Victoria – there is little waterlogging in these areas which tends to be the contributing factor to lower yields around Willaura, Skipton and Beaufort. Most crops look fantastic and could yield 5-7 tonnes/hectare.

Northeast Victoria – in the Dookie to Rutherglen to Yarrawonga triangle, there are some “cracker crops” according to Mr Grey who said they had the potential to yield 4-5 tonnes/hectare. But he said 5km over the border into NSW, the situation changed dramatically with declining yields and frost damage making for a poor season.

That assessment was confirmed Lisa Castleman, the Local Lands Services cropping agronomist at Wagga Wagga, NSW, who said it had been a tough year.

“I do not know anyone who would not be disappointed by the lack of rain in September,” Ms Castleman said.

“The lack of rain cost everyone yield and while a wheat plant might have an amazing ability to compensate, the lack of rain combined with big frost events means there is a lot of disappointment out there.”

Ms Castleman said a frost on August 20 had done real damage, but then a series of frosts between August 28 until September 2, as well as a couple of frosts in mid-September had really affected crops.

“In general, crop yields were impacted by an extremely dry September and severe frost events in late winter and spring,” she said.

“Much of the region around Wagga Wagga has only had 100-150mm growing season rainfall.

“We have some people who have cut canola crops for hay and others who won’t even do that because the biomass (plant volume) is not great enough.”

Rain in the past two weeks, in three separate events, has done some good for those crops that were hanging in there.

But in other areas, harvest is about to begin.

“I know one farmer in our region who would not normally start harvest until November 5,” Ms Castleman said.

“He is starting to windrow his canola this week and expecting to harvest barley.