GRAPHENE is, quite literally, the stuff of superhero comics. It’s made from carbon, is one atom thick, has an optical transparency of 97.3 per cent and also happens to be the strongest material on earth. 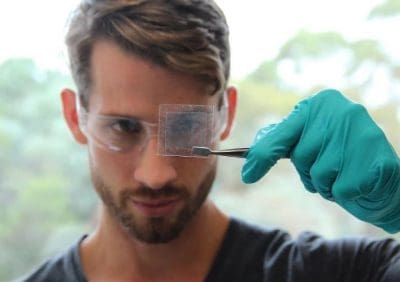 Apart from a superhero’s armour, graphene is actually very useful in real life.

It can do anything from improving battery performance in energy devices to developing water purification membranes.

We’ve known its potential for a long time, but the major roadblock in commercialising it has always been the high-cost of producing quality, large-scale graphene.

The story begins in Lindfield, NSW, where CSIRO scientists have found a cheaper and faster way to produce graphene.

The new technology transforms soybean oil – a renewable and natural material – into functional and highly controlled graphene films composed of one to a few layers, all in a single step.

The technology reduces the cost of graphene production to a fraction of its current price, making it a whole lot cheaper to produce, while providing many new applications.

It has excellent electronic, mechanical, thermal and optical properties. Further uses range from water filtration to renewable energy, sensors and personalised healthcare and medicine, just to name a few.

The team has also been testing other triglyceride (carbon)-containing precursors – like butter and even waste oils drained from your barbecue – which can also be used to create graphene.

In the future you could turn your barbecue waste into the strongest material on earth, that also cleans the environment. Talk about a win-win situation!

Now that we’ve figured out a low-cost production method for graphene, the next step is getting it commercialised ASAP so smart phones can have better-than-ever battery performance.