ON-SITE STORAGE capacity at Defiance Maize Products, is set to jump from 3000 tonnes to 13,800t with the installation of six new 1800t silos which are scheduled to be in place in January 2019. 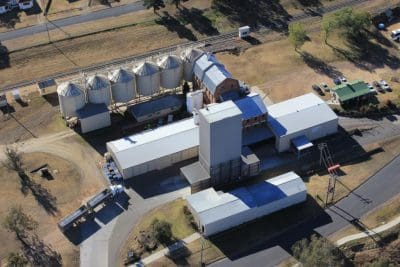 Six 1800-tonne silos are to be installed at Corson’s Defiance Maize Products mill at Warwick to supplement the 3000t of storage already on the site. Photo: Corson

The Defiance mill processes 30,000t of maize per year, and until now has been storing maize in off-site facilities on the Southern Downs.

The silos are being manufactured at Denny’s Engineering in the nearby town of Allora, and will be installed adjacent to the mill’s six existing 500t silos.

“We’re keen to support local business, and this investment in grain storage shows our long-term commitment to the Defiance site.”

The mill produces grits, semolina and polenta for human consumption in the form of breakfast cereals, snack foods, and baked goods.

Mr Prenter said the Warwick mill turned over maize three times per year, and its intake area was centred in Queensland.

“We get a good chunk of the maize we use from the Southern Downs, and we’ve got a customer base in the eastern states which has been pretty loyal to us.”

“We’ve been well supported by Queensland growers, and in the future we’re looking to grow our supply area around Warwick.”

He said dry conditions which were impacting growers on the Darling Downs were of concern to the company as the time for new-crop maize planting approached.

“Our lead concern right now is the welfare of our farmers during this extremely dry weather window.”