Tasmanian wheat gets a bite from Ridley’s fish-feed plant

Ridley Corporation’s planned aquafeed plant in Tasmania is emerging as a customer for the island state’s very own high-protein wheats. 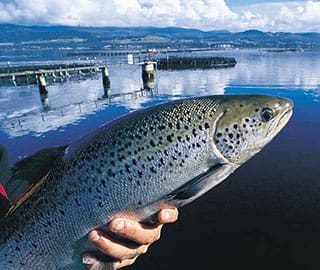 Announced in January, the facility at Westbury in northern Tasmania will have an initial annual capacity of 50,000 tonnes when it opens in 2019, and will enable Ridley’s salmon feed production to relocate out of its mill at Narangba in Brisbane.

Ridley uses around 20 per cent wheat and barley in total in its aquafeed ration, with the balance of its protein coming from sources including pulses and animal proteins, namely meals which are by-products of ovine, bovine, poultry and fish processing.

“We will be looking to source wheat that meets the GTA Hard 2 wheat spec, and if local producers have product that meets the quality requirement, we would certainly look to engage with these farmers,” Ridley general manager merchandising, Michael Reeves, said.

Ridley said the Westbury plant would bring the company closer to its Tasmanian customers, who would benefit from reduced supply-chain costs, shorter delivery lead times, and from being able to collaborate more closely on new product development and dietary enhancements.

BioMar Group, a Danish company which currently supplies Australia and New Zealand customers with product from its factories in Chile and Scotland, also plans to build an aquafeed plant in Australia by 2019, and sources said it was likely to be located in Tasmania or Victoria.

If Tasmania wins out, the BioMar facility could also be another market for locally grown Hard 2-type wheat.

In a statement, BioMar said its decision to invest in a fish-feed factory in Australia was driven by growing demand from Australia’s aquaculture sector, which the company rated as having high-growth potential across a broad range of species.

Skretting, Tasmania’s major aquafeed plant, uses around 12-13pc of Hard 2 wheat, and 6-7pc in total dehulled of faba beans and lupins imported from the mainland in its ration.

TAP Agrico is Tasmania’s biggest bulk handler, and its managing director, David Skipper, said wheat and faba beans were locally grown crops which could best fit into the aquafeed equation.

As varieties and crop nutrition management have improved, Tasmania has proven itself able to grow wheats of 12pc protein or more, but not from registered Hard varieties.

However, Mr Skipper said he could see some maturing in the Tasmanian grain market, and hoped the aquafeed market would consider local product.

Tasmanian Flour Mill, for example, sources around 30,000t of bread wheat from Queensland and/or northern NSW per annum, and Mr Skipper said Tasmanian high-protein wheat was starting to make its way into the blend.

“We’ve been segregating, and that includes 2,000t milling wheats for Tas Flour,”

TAP AgriCo owns or leases 32,000t of storage capacity, and receives high-protein wheat, malting barley which goes to the Joe White plant at Devonport, and feed wheat and barley, plus oats, triticale, canola, peas and lupins, all of which go into the stockfeed complex.

“With H2 protein wheat for fish feed, the Tasmanian grower hasn’t been able to participate. We can’t produce an H2, but if there are high-protein or APW varieties that suit, it would be great if we could put them into the mix.

Dehulled faba beans were also a preferred ingredient for aquafeed rations, but a lack of dehulling capacity in Tasmania could limit that market.

“With a dehuller, Ridley or whoever could use local product and eliminate some of those risks like contamination and container shortages. It could work very well.”

At present, crushed canola is the only Tasmanian ingredient regularly going into fish rations.

“There is certainly a big opening for cereal grains to enter into the dairy market, but the Tasmanian Freight Equalisation Subsidy (TFES) makes it cheaper to land grain in Burnie from Victoria than it does to buy it locally.”

Tasmanian currently grows between 80,000 and 120,000t of cereals and oilseeds per annum, and imports roughly 250,000t of feedgrains from the mainland.

The variability is tied to seasons, and to the appeal of competing crops like poppies and pastures.

Land use in Tasmania is undergoing significant change as horticultural producers in the state’s northwest ratchet down production on low price signals, and dairying moves into the Midlands on new irrigation systems which are displacing some wool and beef cattle production.

Tasmanian grower and Grains Research and Development Corporation Southern Regional Panel chair, Keith Pengilley, said he could see Tasmania’s grain production doubling over the next five to 10 years, and aquafeed demand could help spur the growth.

Mr Pengilley said a decrease in returns from vegetables and poppies over the past five years has boosted interest in cereal cropping.

“We’ve seen a dynamic shift in where grain can fit in the Tasmanian landscape. We are now seeing grain as very attractive.

“Grain was essential a poor cousin, and now it’s coming into its own. Plenty of commercial crops are making 10-12t/ha, and GRDC is investing in HyperYielding cereals to help push agronomy for wheat and barley.

“If we look ahead 10 to 15 years, we could produce up to half a million tonnes of grain, but we will need bulk handling.”

Grain traders said protein increments payable for wheat would increase its appeal to growers prepared to invest in sufficient nitrogen to make crops hit or exceed a protein target of 12pc.

Barley on the radar

Barley is currently used in Australian aquafeed rations as a binding agent, but the US Agricultural Research Service has developed an enzymatic process that removes the carbohydrates and produces a protein concentrate as an ethanol by-product.

Commercial trials of the barley enzyme-based feeds are occurring in the US, and the research has sparked interest from barley growers in Tasmania.