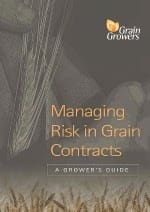 GrainGrowers has released an updated Managing Risk in Grain Contracts – A Grower’s Guide for the 2016 harvest.

Almost $45 million has been lost to the Australian grain production sector over recent years, due to a range of trader insolvencies. Grain farmers are exposed to significant losses when traders become insolvent, and contracts only afford protection from losses to the extent that counter-party risk is managed.

GrainGrowers Industry Engagement Manager Laureta Wallace said the Guide provided practical advice on how farmers could limit their exposure to counter-party risk and the fallout from trader insolvencies.

“Growers can go a long way to mitigating contract counter-party risk by implementing a number of straight forward tactics in both their contracting and their wider marketing activities.”

Ms Wallace said the when selling grain at busy times such as harvest, it was not uncommon for growers to unknowingly expose themselves to potentially costly risks.

“Farmers are most exposed to contract risk when they don’t fully understand the contract they are entering into; enter into a contract unintentionally or – which often happens – in pursuit of a price advantage contract do not fully investigate potential counter-party risk.”

“Being aware of what constitutes a contract; when ownership or title to grain actually passes; the intricacies of payments terms and carrying out adequate due diligence are all important parts of managing risk,” Ms Wallace said.

Since the first release of the Managing Risk in Grain Contracts – A Grower’s Guide during 2014, changes have been made to the protections afforded to farmers when contracting.

“As of 12 November 2016 small businesses, of which most farming operations qualify as, are protected by the Australian Consumer Law’s unfair contract provisions.

“The changes recognise the market power imbalance that may exist in business-to-business transactions, for example between a grain farm business and a grain trader.”

Under the Competition and Consumer Act 2010 unfair contract terms include:

The Guide also outlines the process for dispute resolutions when a contract does not go as a party had planned.

“Grain Trade Australia provides a set of dispute resolution rules – of which many grain contracts (but not all) operate pursuant to.”

“A key part of the GTA Dispute Resolution Rules is the ability to access the services of GTA-Approved Arbitrators – some of which are farmers,” Ms Wallace said.

“A list of the approved grower arbitrators is provided for in the Managing Risk in Grain Contracts – A Grower’s Guide and on the GTA website.”

The Guide also outlines the process of register a grower’s interest in grain that has been delivered but not yet paid for on the Personal Property Securities Register (PPSR).

The Managing Risk in Grain Contracts – A Grower’s Guide is available for free download at www.graingrowers.com.au.