Chance of El Niño in spring increases to 50pc

WHILE the El Niño–Southern Oscillation (ENSO) remains neutral, the latest model outlooks and recent warming in the tropical Pacific Ocean indicate the chance of El Niño forming in spring has increased, according to the latest outlook from the Bureau of Meteorology. 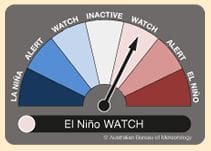 As a result, the Bureau’s ENSO Outlook status has moved to El Niño Watch which means the likelihood of El Niño forming in 2018 is approximately 50 per cent – double the normal chance.

Sea surface temperatures in the eastern Pacific Ocean, though currently neutral, have been slowly warming since April.

Importantly, waters below the surface of the tropical Pacific are now warmer than average—a common precursor to El Niño.

The majority of international climate models surveyed by the Bureau forecast the tropical Pacific Ocean will continue to warm but stay in the neutral range during July and August.

However, five of eight models indicate the ocean warmth is likely to reach El Niño thresholds in the southern hemisphere spring, while a sixth model falls just short.

During El Niño, rainfall in eastern Australian is typically below average during winter and spring. A neutral ENSO phase has little effect on Australian climate.

The Indian Ocean Dipole (IOD) remains neutral. Five of six climate models indicate the IOD is likely to remain neutral in the coming months, and one model suggests a positive IOD.