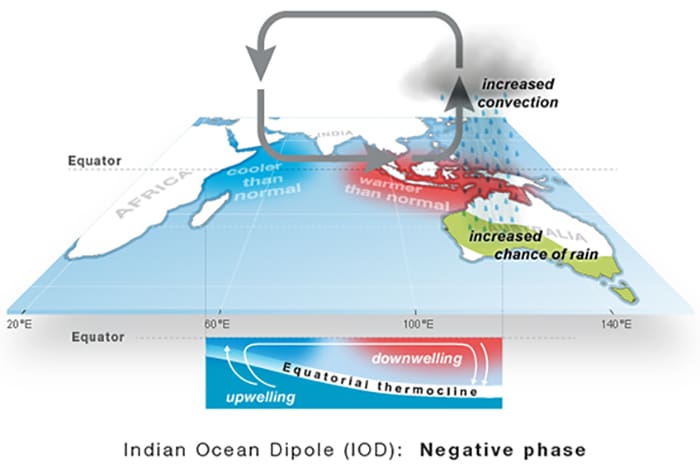 The Bureau is making these predictions despite the El Niño–Southern Oscillation (ENSO) and IOD both currently remaining neutral, and despite neutral conditions being favoured for the coming months.

Atmospheric and oceanic indicators of ENSO, including the Southern Oscillation Index (SOI), trade winds, cloudiness near the Date Line, and sea surface and sub-surface temperatures in the tropical Pacific Ocean remain consistent with a neutral ENSO state.

Most of the eight climate models surveyed by the Bureau indicate that ENSO is likely to stay neutral through the Southern Hemisphere winter.

However, three models reach or exceed La Niña levels in winter or spring.

This means that current ENSO forecasts beyond May should be used with some caution.

While the IOD is also currently neutral, all six international climate models surveyed suggest negative IOD conditions could develop from the middle of the Southern Hemisphere winter.

However, individual models all indicate a number of possibilities in the neutral to negative IOD range.

Furthermore, the accuracy of IOD forecasts is low at this time of the year, with forecast accuracy improving from late autumn.

The Southern Annular Mode (SAM) is currently neutral and is forecast to remain neutral for the coming three weeks. SAM has little influence upon Australian rainfall in autumn.