RAIN IN the past week has further consolidated yield prospects for Western Australia’s largely thriving winter crop, and delivered handy falls to crops on South Australia’s southernmost growing areas, but little to paddocks on the plains and outer slopes of eastern Australia. 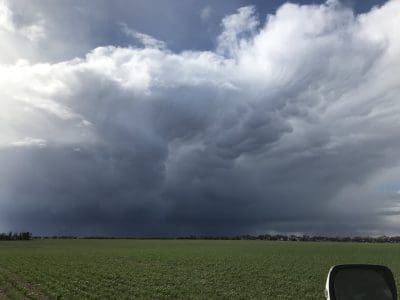 This front passed through the Mallee and brought some rain with it.

Eyre Peninsula Integrated Commodities (EPIC) co-prinicipal, Steve Whillas, said the recent rain has bolstered average or better yield prospects for the Lower EP, while falls on the Central and Upper EP had bought the crops some time.

“What the rain does is gives us some hope — hope for sheep farmers that feed will grow, and hope for growers for the crops they have in the ground,” Mr Whillas said.

Strong winds in the past week accompanied the rain over much of Australia’s grainbelt, and Mr Whillas said they had damaged some already struggling crops on the Central and Upper EP.

“Some growers are making decisions about reseeding with the same seed they planted earlier, because all they really want now is some ground cover to stop their soil blowing away all summer.”

Falls across EP’s northern reaches have varied greatly, with some growers registering 70 millimetres, and others as little as 15mm, while falls across Lower EP have generally been in excess of 50mm.

“That rain last week was the biggest single rain event EP has had for the year, and the Lower EP is looking as good as it’s ever looked.”

“Unfortunately, that amount won’t help a lot because most of the crops around Tamworth and on the Liverpool Plains haven’t been sown,” Mr Gardner said.

“There’s very little winter crop in, and what is in is generally under irrigation, and some of that was chickpeas, barley or durum double-cropped after cotton.”

Crops which have established, especially on the outer slopes and plains have suffered significant grazing pressure from kangaroos unable to find feed elsewhere.

They are also enduring a run of frosts which will sap topsoil moisture.

In Victoria and southwest NSW, the Murray/Mallee region generally recorded 5-15mm in the past week, and AGRIvision Consultants general manager, Kent Wooding, said crops around his base in Swan Hill were looking at below-average yield potential.

“The Wimmera is in better shape. They’ve had an average growing season, and in the Mallee, there are fodder crops for stock, and there’s still a bit of hay and grain around,” Mr Wooding said.

“The crops are there, and they have some potential, but we really need rain to get them through.”

The Central and Southern Tablelands and adjoining slopes of NSW received some handy falls of up to 25mm, and more in places, and this will boost pasture growth provided some warm days counteract the impact of frosts.

Falls on the Queensland grainbelt were negligible, while WA growing regions had 15-50mm, with coastal areas getting the highest totals.