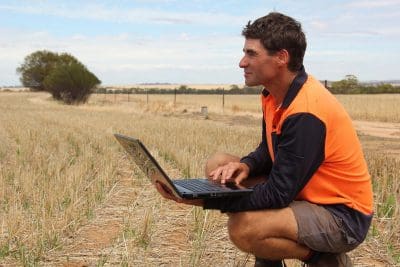 It’s the second radar to be installed by the Department of Agriculture and Food (DAFWA) in partnership with the Bureau of Meteorology (BoM), with images from the Newdegate site already available and construction of the Watheroo facility currently underway.

Mr Gethin, who farms at nearby Hines Hill, has a particular interest in weather data, as a former employee of the BoM.

“I’ve been waiting for this for years,” he said from his shearing shed when interviewed.

“It would be really useful on a day like today to know whether these overcast conditions are going to deteriorate into rain and to know how long I’ve got to get the sheep back into the shed.”

Mr Gethin intended to use the Doppler radar real time rainfall and wind information in conjunction with the satellite data to refine his day-to-day operations.

“I tend to look at the weather models for the next week, then at the daily satellite pictures and now I will be able to use the radar images to guide my operational program down to the hour,” he said.

“I will be able to track a cold front as it comes in and know how long I have to move livestock or plan my spray program. The wind information will also assist with spraying decisions.”

“The Western Australian wheatbelt will have the most comprehensive weather network in the southern hemisphere as a result of Doppler radar coverage and the DAFWA network of 175 automatic weather stations,” Mr Metcalfe said.

“As the growing season approaches, farm businesses will be able to integrate the Doppler radar information with data from the department’s weather station network to make time of sowing, fertiliser, spraying and livestock management decisions with greater confidence.”

The department is also working on projects to integrate the information from the Doppler radars into new digital information tools.

“The data from these new radars, in conjunction with the Bureau’s super computer, will enhance our forecast information,” Mr Bergin said.

“The new radars also improve the Bureau’s capacity to track thunderstorms and cold fronts as they cross the wheatbelt and to provide more timely, localised advice to emergency services during severe weather events, such as wind changes during a bushfire.”

Images from the Watheroo site are expected to come online in April.

To view Doppler radar images, visit bom.gov.au and click on ‘radars’ on the homepage.

Detailed weather information, including data from the department’s weather station network, is available at agric.wa.gov.au/weatherstations