THE development of a La Niña weather pattern – which typically means increased rainfall, cooler maximum temperatures and greater cyclone activity – is no longer likely in the coming months, according to the latest outlook from the Bureau of Meteorology (BOM).

Most climate models indicate sea surface temperatures in the tropical Pacific Ocean will remain in the neutral range throughout the southern summer and autumn, hence the Bureau’s ENSO Outlook status has shifted from La Niña ‘watch’ to ‘inactive’. 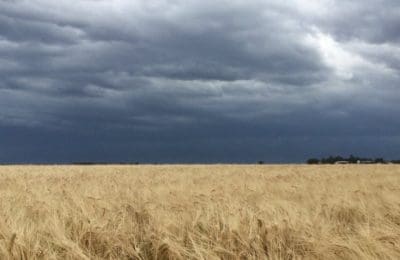 Australia’s weather outlook has defaulted to neutral, with the likelihood of a warmer and drier start to summer.

An ‘inactive’ status means there is little sign of El Niño or La Niña developing in the coming months.

Although some very weak La Niña-like patterns continue—such as cooler than normal ocean temperatures and reduced cloudiness in the central and eastern Pacific—La Niña thresholds have not been met.

Climate models and current observations suggest these La Niña-like patterns will not persist.

The Indian Ocean Dipole (IOD) also remains neutral—neither positive nor negative—as is typical at this time of year.

When ENSO and the IOD are neutral they have limited impact on Australia’s climate.

BOM senior climatologist, Robyn Duell, said the combination of climate drivers contributed to Australia observing its wettest May to September on record in 2016.

“We have come out of a record wet May to September period which was partly due to the weak La Nina patterns in the Pacific and also because of the very strong negative Indian Ocean Dipole,” she said.

“That is one of the main reasons why we had widespread rainfall all the way across Australia.”

Ms Duell said Australia had just come through a long period of border-line La Nina conditions, but nothing had reached the threshold for La Nina.

“It now looks like the La Nina-like patterns are not going to persist, so we are in ‘neutral’ and expect to stay ‘neutral’ in coming months,” she said.

“In terms of outlook, the Indian Ocean Dipole has now ended and it looks like the weak La Nina-like pattern is not going to develop into La Nina.

“So, for summer, it looks like a drier and warmer start for a lot of the country in December. But after that, the summer is likely to be drier in the east and wetter than usual in north-west WA because there is still a lot of warm water there.”

University of Southern Queensland International Centre for Applied Climate Sciences senior climate scientist, Dave McRae, said based on the current Southern Oscillation Index (SOI) phase, throughout most of eastern Australia there was a 30 to 50 per cent (slightly below average to average) chance of above median rainfall through to the end of February.

“The main exception is for the south west and far central west of Queensland where there is a 40pc to 60pc, with a few regions up to 70pc, chance of getting above median rainfall,” he said. 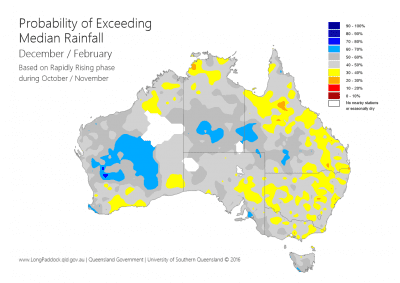 Mr McRae said for those regions with a lower chance of getting above median rainfall, that did not necessarily mean no rainfall.

“As we are now in our northern summer rainfall season, there is a reasonable chance of getting some useful rain,” he said.

“As well, with the recent climate (SOI) pattern, there tends to be an increase in the number of days where atmospheric conditions are ripe for the development of severe storms (albeit with an increased risk of hail) especially throughout southern Queensland and northern NSW.”

Mr McRae said after a ‘near El Nino event’ during 2014/15 and a strong El Niño event during 2015/16 resulted in widespread drought and above average temperatures, there was increased interest as to what was likely to develop during 2016/17.

“As expected and generally welcome, the 2015/16 El Niño event decayed during autumn and early winter with above average rainfall across much of the eastern half of Australia. This is somewhat typical in this region following the decay of an El Niño event,” he said.

Mr McRae said that during this period, there had also been potential for a La Niña to develop.

“Despite there being some way to go before climate indicators such as the Southern Oscillation Index, sea surface temperature anomalies (SSTs) and Pacific Trade Winds reached La Niña thresholds, there was a large amount of media coverage given to a developing La Niña,” he said.

“However, the reality was a neutral ENSO (El Niño Southern Oscillation) pattern was the most likely outcome.

“Currently, the Pacific remains in a neutral ENSO pattern which is reflected by indicators such sea surface temperatures and trade winds in the central Pacific remaining at near normal levels. SOI values are also relatively neutral with a 30-day average of minus 1.3 as of the December 6.”