HEATWAVE conditions across the New South Wales/Queensland cropping belt have triggered fire alerts for winter crop harvesters in the south and forced a pause in some summer cropping activities in the north.

Parts of southern NSW where winter crop harvest has been gathering pace bore the brunt of the searing conditions late last week.

The NSW Rural Fire Services issued an alert to farmers harvesting in southern NSW last Friday to stop and check conditions before deciding whether it was safe to continue.

The alert area stretched from the Victorian border through the Albury, Hume and Berrigan areas up to the Lockhart, Wagga Wagga, Junee and Coolamon districts.

Conditions in southern NSW eased over the weekend, but the heatwave has continued to impact the drought-affected regions of north west NSW and southern Queensland.

Total fire bans were in force yesterday on the NSW north west slopes and plains and New England regions.

Conditions are not expected to ease until Wednesday with temperature maximums remaining in the high 30s/low 40s today and tomorrow in north west NSW and the Darling Downs. 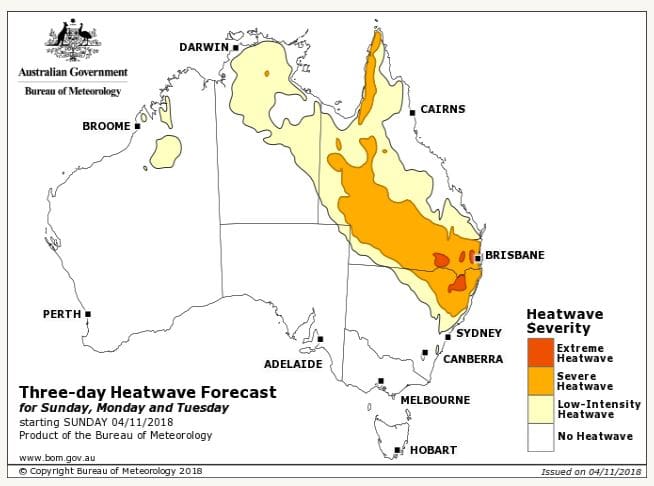 AgForce Queensland grains president, Wayne Newton, said there had been a surge in summer crop plantings in southern Queensland in the past couple of weeks, but the sudden heatwave and dry surface conditions had forced a pause in activity in some areas.

“A fair few people have pulled up from planting because they are not happy that they will get the crop up with the combination of the heat and moisture conditions,” he said.

“Some crops that are just up will be alright. Some that have been planted in the last few days will need a shower of rain by the end of the week, which they are forecasting.

“The heat also affects people’s ability to spray weeds, although most of the weed spraying has been caught up with.”

Mr Newton said, generally, the heat would not be a high risk for winter crop harvesting operations in Queensland.

“We don’t really have fire weather alert days. We don’t get the severe conditions they get in the south where the temperatures are in the mid-40s, the relative humidity is so low and the wind speed is high,” he said.

“When a fire gets away under those conditions down there there is nothing to stop it because it is all winter cropping, whereas on the Darling Downs it is broken up with winter crop, summer crop and fallow ground, so it usually burns the paddock where it started and that is the end of it.”