‘Flash droughts’ can dry out soil in weeks. New research shows what they look like in Australia

AT THE tail end of winter in 2015, the ground in the Wimmera in north-eastern Victoria had been a little dry but conditions weren’t too bad for farmers. The crop season was going well.

The start of September looked promising. It was cool, and there were decent rains. One Wimmera lentil grower said, “As long as it doesn’t get too hot, we should actually be okay.”

A few weeks later, summer weather had arrived early. At the start of October, the soils were baked dry. Lentils and other pulse crops were devastated.

This kind of event, where drier-than-normal conditions transform into severe or extreme drought in the space of weeks, is called a “flash drought”. While flash droughts are still not well understood, our research studies how they occur in Australia – which may help move us toward being able to warn of flash drought in advance.

The different kinds of drought

Scientists typically talk about drought as a lack or deficit of available moisture to meet various needs, such as in agriculture or for water resources. We often classify different types of drought depending on where there is a lack of water, or what its effects are:

Different types of drought can occur at the same time, or a drought may evolve from one type to another. Droughts can last from months to decades, and can cover areas from a local region to most of the continent.

Recently, a new characterisation of drought has been added to the drought spectrum: “flash” drought.

Flash droughts are droughts that begin suddenly and then rapidly become more intense. Droughts only occur when there is insufficient rainfall, but flash droughts intensify rapidly over timescales of weeks to months because of other factors such as high temperatures, low humidity, strong winds and clear skies.

These conditions make the air “thirsty”, which meteorologists call “increased evaporative demand”. This means more water evaporates from the surface and transpires from plants, and moisture in the soil is rapidly depleted. 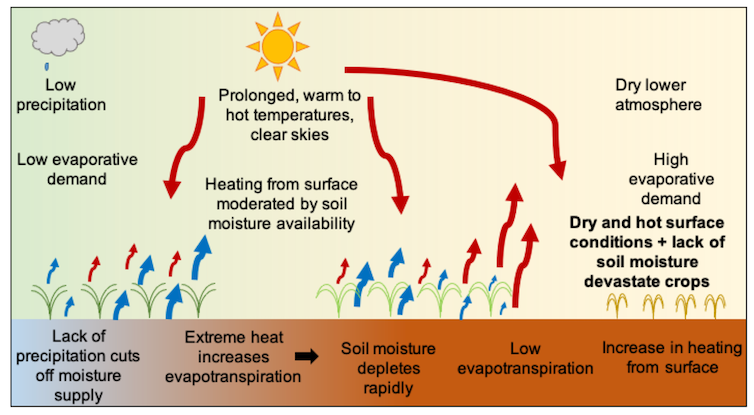 Figure 2: When there is a lack of rain accompanied by high temperature, low humidity, strong wind and clear skies, conditions are right for flash drought.
Tess Parker, Author provided

Why haven’t we heard about flash drought before?

Flash droughts have always existed, and were first described in 2002. However, some particularly devastating flash droughts over the past decade have led to a surge of interest among researchers.

One such drought happened in the US Midwest. In May 2012, 30 per cent of the continental United States was experiencing abnormally dry conditions. By August, that had extended to more than 60pc. Although other rapidly developing droughts had been seen before, the widespread impacts of this event caught the attention of the US public and government.

Flash droughts are also increasingly a focus of attention in China and Australia. One of the few studies of flash drought in Australia examined an event when conditions in the country’s east suddenly changed from wet in December 2017, to dry in January 2018.

Anecdotal reports from farmers in the northern Murray–Darling Basin indicated removal of livestock from properties, and sheep numbers at record lows. By June 2018, there were reports of trees dying and a desert-like landscape, with little grass cover.

What happened in the Wimmera?

Our recent study of flash drought in Australia used several different measurements to capture a range of conditions related to drought.

The index we used to determine the atmospheric demand shows that the speed of development and the intensity of flash drought are driven by high temperatures, low humidity, strong winds and clear skies. All of these increase the demand for moisture from the surface.

Read more:
The science of drought is complex but the message on climate change is clear


After a drier than normal winter, southeast Australia experienced a cool and wet start to September 2015, with some rain in the first week of the month. Humidity and surface air pressure were roughly average, and surface sunshine below average, suggesting normal evaporative demand.

A warm spell began in mid-September, and intensified into a severe heatwave by early October, with temperatures over 35℃ persisting for several days in some areas. Throughout this period the overlying air became very dry. A persistent high-pressure system brought clear skies and increased sunshine.

By the end of October, the Wimmera was in severe or extreme drought conditions, devastating pulse and grain crops. Analysts estimated wheat production fell by 23%, with a loss of A$500 million in potential yields.

Flash droughts in Australia occur in all seasons. In the Wimmera, flash droughts are most frequent in summer and autumn. They can end as rapidly as they start, but in some cases may last many months.

In several instances, flash droughts in the Wimmera have started in summer or autumn, and the region has remained in drought through the following winter, and sometimes into spring. In this way, flash drought can be the catalyst for the common droughts lasting 6-12 months typical of southeast Australia.


But there is some potential good news. We have long known that seasonal-scale droughts in Australia are strongly related to the El Niño-Southern Oscillation (ENSO), which gives us some ability to predict them.

ENSO strongly affects rainfall, which means it can also be linked to flash droughts in winter and spring.

Further, sub-seasonal forecasting, which predicts the climatic conditions weeks to a month in advance, has improved considerably in recent years. Given flash droughts occur on these timescales, we can be optimistic that prediction of flash droughts may be possible.