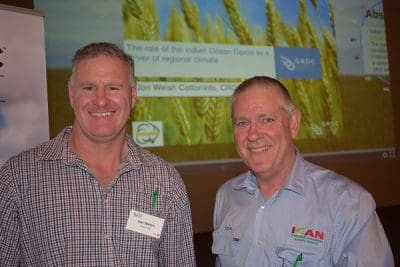 Speaking at the GRDC Research Update in Goondiwindi, Qld, Mr Welsh said both weather phenomena had an influence on the climate nationwide.

“The Indian Ocean does affect our winter cropping rainfall and needs to be looked at in combination with the Pacific Ocean and other drivers. The whole nation’s crop is sensitive to the IOD,” he said.

Like the Pacific Ocean ENSO, the IOD is a coupled ocean and atmosphere phenomenon that, broadly speaking, measures the difference in sea-surface temperatures between the western and eastern parts of the Indian Ocean.

Mr Welsh said while there were still Australian and American scientists who didn’t believe in the IOD, recent research confirmed there was a relationship between the IOD and ENSO that needed to be better understood.

“A positive IOD, ironically, is not positive for our rainfall as the warm water is on the wrong side of the Indian Ocean for us. It generally equates to less than favourable winter and spring rainfall,” he said.

“Conversely, with a negative IOD, it is a positive for us. It has more warm water on the eastern side of the Indian Ocean which generally filters down to the key grain growing areas of Australia.” 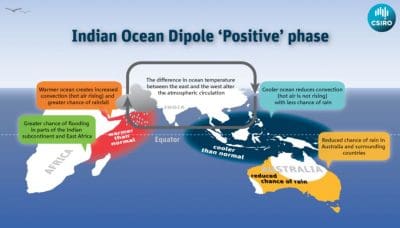 Mr Welsh said the combination of the IOD and ENSO was something growers needed to be aware of in their decision making.

“On the other side of that, when the Pacific Ocean warm waters align with a negative IOD, that is when you get the wet years, much like 2010.”

Mr Welsh said a recent study by the same scientists who discovered the IOD collated all the nation’s wheat crop information to see what impact the IOD had on Australia’s wheat crops.

“They found high confidence that the Indian Ocean had very negative effects when the circulation patterns weren’t favourable with lots of hot, dry weather and clear skies having a negative effect on the finishing rains. Conversely, the negative IOD showed there were good effects,” he said.

Mr Welsh said Australia had just come off the back of a record negative IOD event in 2016 which correlated with major rains for the winter crop.

He said the IOD was a particularly useful indicator of winter and spring conditions, starting to evolve in the April period and completing its life cycle in October.

“That is very well aligned with the annual winter crop. It is not very relevant over the summer growing season,” he said.

“The Pacific Ocean is much the same, except it continues to evolve through to the end of the calendar year and then decays.”

Looking at the winter cropping season ahead, Mr Welsh said “to be frank, the IOD doesn’t look like it is where we need it to be”.

“It is the same with the Pacific Ocean. The worrying thing is all the global models are saying there is roughly a 50 per cent chance of an El Nino event occurring this year,” he said.