THE Indian Ocean Dipole (IOD) is now a household name among farmers, a primary source of Australian soft-season rainfall and is a major contributor to the size of the nation’s winter crop. 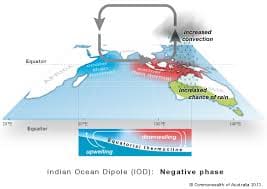 Although the IOD is recognised now, Japanese researchers who discovered the phenomenon about a quarter-century ago recently reflected on the early days of ocean monitoring; using historical observations from passing ships; basic spreadsheet data-analysis; and an unwillingness of the global research community to accept the IOD phenomenon.

Investigations into the ‘see-saw’ from warm to cool waters across the Indian Ocean were originally dismissed as a “slave to El Niño-Southern Oscillation (ENSO)”, meaning that ENSO and IOD were one-and-the-same.

However, lead researcher Professor Toshio Yamagata at the University of Tokyo and the Japan Agency for Marine-Earth Science and Technology describes the past difficulties of establishing credibility with the IOD hypothesis for his team of researchers. “The notion that the IOD and ENSO were one-and-the same was simply at odds with what we’d found – the IOD peaked in spring, whereas ENSO peaked in the Australian summer,” Prof. Yamagata said.

“Our research articles with these concepts were rejected many times by journal editors. As a climate scientist based in Asia, it was never easy to hear some of your international peers say “I wish Toshio would take his ideas and go just away”.

“The investigation began after an extremely hot year in Japan in 1994 and a casual discussion with Australian Prof. Gary Meyers concurred in the same period there were anomalies in Australia. His homeland had suffered a record-breaking drought that seemed to have little to do with the El Niño.

“We didn’t know what was going on and things weren’t adding up.

“After much debate, we eventually found some support for the IOD concept, mainly as a result of research contacts we had developed over the years: one or two colleagues in Australia and the United States.

“Our ideas and theories were reinforced when we were informed by our close contacts that other scientists elsewhere were submitting almost the same but limited work, which eventually forced the hand of journal editors to acknowledge and publish our discovery.

“Looking back now, my advice to any young career scientist is: be creative, stick to your own original ideas and don’t be tempted to follow popularity to seek routine approval.”

A scientific journal article published in Nature titled “A Dipole Mode in the Tropical Indian Ocean” co-authored by Prof. Yamagata in 1999, has now been cited an incredible 4200 times.

In north-west New South Wales, climate is a hot topic, exacerbated by a wet winter seasonal forecast that failed to eventuate.

Once considered the engine-room of the Australian cotton industry, the Namoi and Gwydir valleys of NSW have historically produced over half the nation’s $2.5 billion cotton crop and rank as the fourth-largest agricultural export.

Throughout the region, on-farm storage and irrigation scheme dams providing water allocations are going into their third cropping season with nil, or minimal allocation.

Jon Welsh and Janine Powell live in the lower Namoi Valley. Their firm, Ag Econ, leads a rural-based team of like-minded researchers and farmers specialising in climate extension, aiming to bridge the gap between complex science and the ability to action an informed farm management decision.

“After what they’ve been through the last three years, farmers and agronomists are asking far more detailed questions on climate than ever before,” Mr Welsh, Ag Econ’s Narrabri-based climate analyst, said.

“Enquiry is now around going upstream for information – no longer can we click send on an email showing a map of Australia with green or red colours and leave them to it.”

Broadacre farmer and Burren Junction Ag Econ partner, Ms Powell, said agriculture was beholden to the climate – “it’s either too dry, too wet, rarely do we get the Goldilocks experience of things being just right”.

“The need to understand climate research has reached a point where it has become too important to ignore in the management of a farm enterprise – we can’t wait five or 10 years for research findings to flow through from rural press or BOM communications to farmers.” Prof. Yamagata recently shared his childhood story and foray into climate science where he candidly admitted he was lured into weather-related science, in part thanks to taking a fancy to a girl living nearby whose father was a director of the meteorological observatory.

“In Japan as a child, I was fascinated by what caused the dust that blew across the neighborhood from the adjacent fields, and the build-up of cumulonimbus clouds, but this was all a bonus for an excuse to come close to a girl whom I fancied at the time!” he said.

“Growing up, it was very exciting to see the observatory release a balloon to measure what was going on in the atmosphere, which made me very curious and this was a deep, complex area of thought that aroused my interest from that point on.”

Japanese research has held much interest in Australia and its findings have been a topic of discussion among Namoi Valley farmers and consultants at routine intervals when planting decisions were made.

CSIRO, Bureau of Meteorology and other researchers around the globe continue exploring the very complex interaction between air, land, and sea.

Through word of mouth, climate researchers in Japan had made connections with farmers in Victoria and NSW about their hypothesis as far back as 2006-07, although the Bureau of Meteorology did not acknowledge IOD in seasonal forecasting communications until mid-2013.

Additionally, a more recent phenomenon impacting eastern Australia is the ENSO “Modoki” concept, a measure of the distribution of warm and cold water in certain parts of the Pacific basin.

Modoki, a Japanese term which means “similar but different”, is reference to an El Niño which was alike, yet nuanced from a traditional El Niño events.

“The phrase, Modoki was coined in a very conversational chat about the ENSO condition at the time with the Japanese press back in 2004, which quickly spread to international media, certainly giving me a shock that people took any notice of what I said,” Prof. Yamagata said.

“In central-eastern Australia where you live, Modoki condition is something that should be closely monitored at certain times, along with its relationship with the IOD, as history has shown when these indicators move into wet or dry phase it can have a big impact on your climate.

“Darwin air pressure is one-half of the pressure gradient making up the SOI along with Tahiti, a measure of El Niño-Southern Oscillation is contaminated by the different phases of the Indian Ocean Dipole at certain times of year.

“Again, this theory was rejected by major climatic journal publications, however an oceanographical journal of the American Geophysical Union eventually accepted this paper.”

In discussing what would help better predict key influences and overcome difficulties associated with IOD and Modoki forecasting, Prof. Yamagata said that should include more observational data in the Indian Ocean, including greater participation from Australia which currently prioritised Pacific Ocean research.

“The weather comes from the west, and governments such as Australian should pay more attention and direct more resources to measuring and covering the Indian Ocean from a security point of view,” he said.

“The Modoki region along the dateline is also very important from an Australian point of view, and we recently published some research on the precursory link between the IOD and this emerging area of global circulation.

“It looks as though a La Niña Modoki may occur in 2021 along with a neutral IOD, so that is a better outlook for eastern Australian farmers.”

In northern-inland NSW, Ag Econ has recognised the need for timely and independent analysis tailored to farmers and advisors, in an increasingly challenging environment to operate agricultural businesses.

The small team of analysts are deeply entrenched in the rural communities in which they live – experiencing the highs and lows associated with dust storms, water shortages and forecasts that create hope for the prosperous times ahead.

“I’m not sure that improving climate literacy is something that will help make farmers instantly rich, which is often the misconception, but at least becoming more aware of the cycles can certainly help avoid making foolish decisions when the odds are otherwise unknowingly stacked against you,” Mr Welsh said.

He sees synergies not only for his own business, but an application for an inquisitive mind in a very complex area of information and evolving science. Chris Clyne stands on the edge of a field of dry land chickpeas on his farm east of Moree.