La Niña still on the cards, but effect likely to be short lived

WHILE the El Niño–Southern Oscillation (ENSO) remains neutral, the Bureau of Meteorology’s ENSO Outlook is currently at La Niña WATCH, meaning there is around a 50 per cent chance of La Niña forming in late 2017. 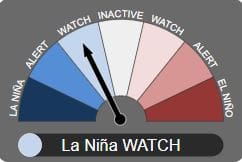 Climate models note that if La Niña does occur, it is likely to be short lived and weak, and its effects upon Australian climate less than during the last La Niña in 2010–12.

However, recent cooling has stalled slightly due to a pulse of tropical activity (known as the Madden-Julian Oscillation). Cooling is expected to resume in the coming fortnight.

Atmospheric indicators of ENSO, such as the Southern Oscillation Index (SOI) and cloudiness near the Date Line have shown signs of shifting into a La Niña-like state.

All international climate models suggest further cooling of the tropical Pacific is likely, with most models reaching La Niña thresholds in late 2017.

Six of eight models suggest that these levels will persist long enough to be considered an event. If La Niña does develop, it is likely to be weak and short-lived.

However, current temperature patterns in the Indian Ocean would typically push Australia’s climate into a drier phase.

The Indian Ocean Dipole (IOD) is currently neutral. IOD events are unable to form between December and April due to the Australian monsoon.