La Nina to make it moist here and dry elsewhere? According to the US weather service, a La Nina weather pattern is likely to form over the coming months, albeit not yet by the Bureau of Meteorology.

The La Nina is known to bring wet weather to Australia (see map); at the same time, it can make conditions in the US and South America dryer. I thought it was time to update some of the articles I wrote last year to get an idea of the potential impact.

The chart below shows the years where La Nina weather patterns were present, displayed against Australia’s ten-year moving average yield. As we can see, more often than not, yields have been higher than the ten-year average when La Nina has been active.

What about other parts of the world? 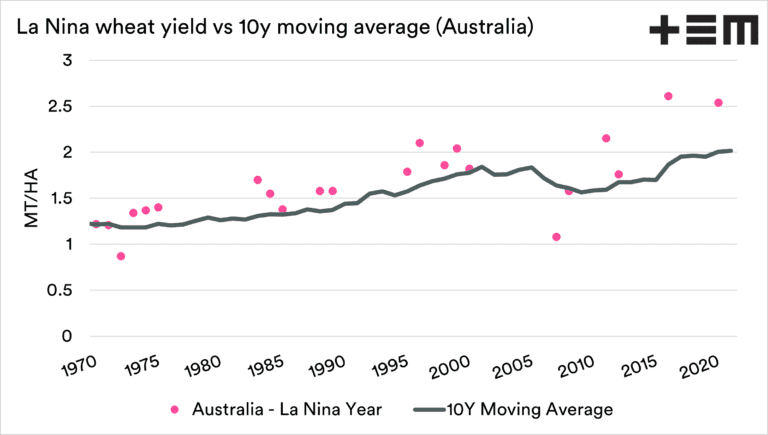 The picture is not quite as clear when we look at the overseas crops in the USA and Argentina, which typically should be dryer.

The charts below show the same as the above, but for Argentina and the United States. In Argentina since 2000, the La Nina has corresponded with three years of higher yields and three years of lower yields.

In the US, wheat yields have generally been positively impacted since 2000, except for two years.

It’s important to note that La Nina does tend to create moist and dry patches around the world, but they don’t necessarily fall at the time, which will correspond with impacting upon the crop. 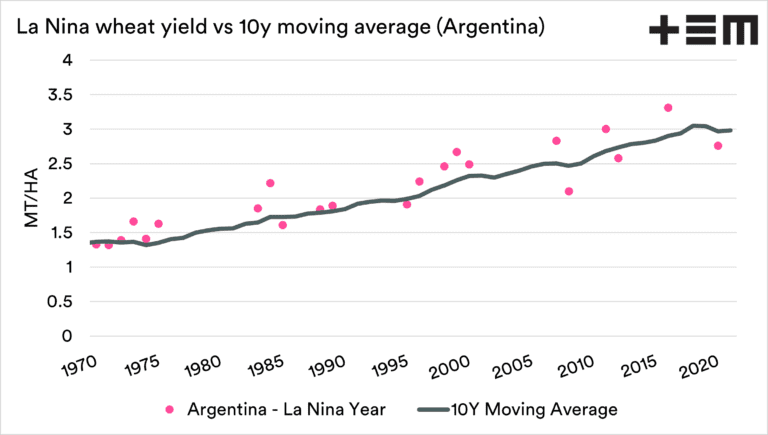 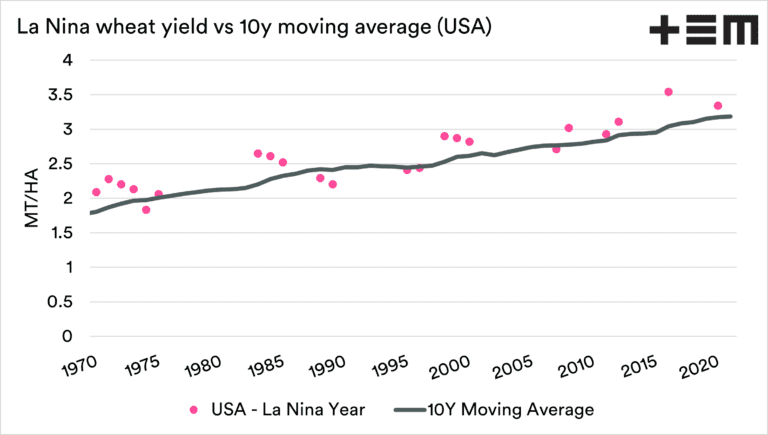 The chart below shows the annual price for wheat; again, these show the price against the 10y moving average. The price used is the nominal price, and does not take into account inflation. This isn’t required, as the purpose is to look at the peaks in pricing versus the 10-year average.

There is a slight pattern where peak pricing has occurred around La Nina years. In wheat, we can see higher pricing in 6 out of 9 of the La Nina periods since the 1970s.  At present, we have just come out of a La Nina and have the possibility of another emerging. We can see that our pricing is substantially above the ten-year average during the current period. 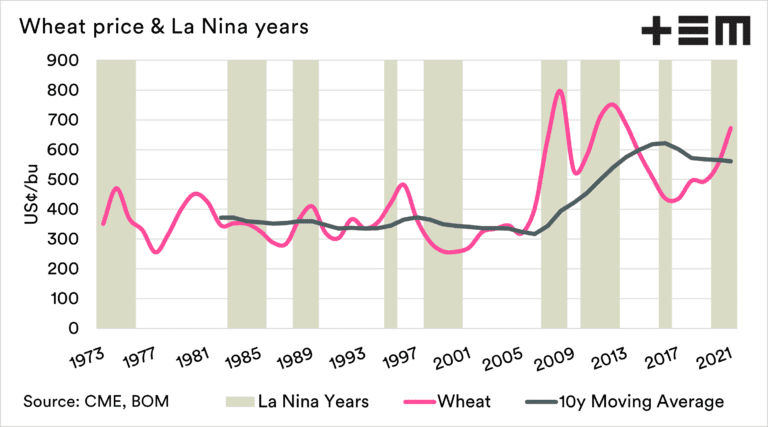 What does it all mean?

A La Nina is definitely positive for Australia, especially the east coast. At the same time, it can be negative for other production areas.

Positive production in Australia, and negative production overseas is a factor driving our pricing higher at the moment. A La Nina has the potential to produce this type of scenario.

There are several factors that will contribute to any impact of La Nina:

At the moment, there is not a consensus that a La Nina will for, and therefore any impact is speculative. It is one to keep an eye out for, especially if it causes a wet harvest.

Source: This article was originally published on the Thomas Elder Markets website: https://www.thomaseldermarkets.com.au/

La Nina – A look outside our bubble

La Nina to bring the rain?