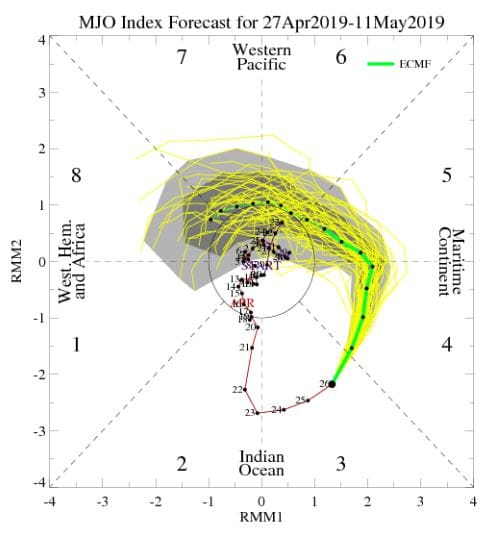 ONE of Australia’s key climate drivers, the Madden-Julian Oscillation (MJO), has reactivated in the Indian Ocean in the past week late in the monsoon season, potentially raising the chances of increased rainfall over eastern Australia.

CottonInfo climate technical lead and AgEcon partner, Jon Welsh, Narrabri, New South Wales, said the MJO was normally a wet season driver, but the wet season had been a month late this year, officially starting on January 25 – the second latest monsoon on record. Mr Welsh said it was a surprise to see the guidance showing the MJO reactivating so late in the monsoon.

“That has two implications. One is that history says that when it come through at this time of year it can lead to increased rainfall anomalies through eastern Australia. Secondly is the impact it can have on the ENSO (El Niño/Southern Oscillation) situation,” he said.

Mr Welsh said it was unusual to see the MJO reactivating at a time when the other major drivers of Australia’s climate, especially in relation to winter crop, were still settling themselves.

“The El Niño is decaying which is somewhat out of step with the normal ENSO life-cycle and the Indian Ocean Dipole (IOD) is trying to find its feet. It is forecast to dip into wetter, negative IOD territory through the winter which is a little bit encouraging,” he said.

“An MJO event in May while the ENSO situation is resetting can play a primary role in El Niño evolution through related sea surface temperature anomalies in the eastern and central Pacific.

“At this stage the MJO guidance suggests the MJO will weaken after passing through the Maritime Continent (Phase 5), but no doubt scientists will be watching the impact of zonal winds and Kelvin waves along the equator during May, following this event.”

Mr Welsh said the MJO had already triggered severe Tropical Cyclone Lorna that was active in the Indian Ocean west of Australia.

“The MJO is in the central areas of the Indian Ocean. It is quite a strong event, which is very interesting because the MJO has been benign for the last month. It has reactivated and, whilst it is later in the year, it still can have a positive impact on our climate,” he said.

What is the MJO?