NSW farmers have experienced a very dry winter with below average rainfall received across 85 per cent of the state. 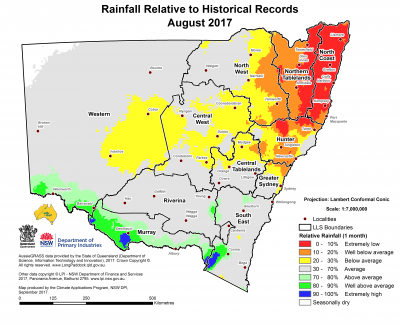 Rainfall was well below average to extremely low across most of inland NSW and the south east, with many areas, particularly in central NSW, receiving rainfall matching recordings in the lowest 10 per cent of years.

NSW Department of Primary Industries (DPI) seasonal conditions coordinator Ian McGowen said rainfall for all of NSW during August was 44pc below average, making it the driest August for the last four years.

“Most of northern, central and western NSW, the Hunter Valley and Sydney basin received generally light and patchy rainfall of between 5-25 millimetres,” Mr McGowen said.

“However, the north coast fared the worst, receiving less than 5 mm.

“The best falls occurred in the south of the state, including areas of the Murray Valley, eastern to central Riverina, southern and central tablelands, alpine areas and south coast.

“Unfortunately, the drier than normal conditions continued into early September.

“The continued warmer than normal daytime temperatures combined with a lack of topsoil moisture, frosts and grazing pressure meant pasture growth remained limited across much of inland NSW.

“The limited August rainfall and frequent frosts have caused winter crop prospects to continue to decline. In many areas, the number of frosts during the growing season has been much greater than normal.”

Compounding the dry season, severe frosts in mid-late August and early September in many areas caused stem and head frosting in cereals, with flower and pod abortion occurring in pulse and canola crops.

“These conditions have meant that many crops have been abandoned west of the Newell Highway across north western and central western NSW and areas of the western Riverina,” Mr McGowen said.

“Crops that have not been as badly affected by frost and moisture stress urgently require above-average to slow or halt declines in potential yield.

“In eastern areas, more rainfall was received during August, but was insufficient to replenish depleted topsoil moisture reserves.

“Growers in a number of areas will need to make difficult decisions soon on whether to persist with crops or to graze them or cut them for hay.

“Areas of the eastern Riverina, south west slopes and the Murray valley received sufficient rainfall during August to maintain crop yield potential, although above average follow up rainfall is required.

“The prospects for dryland summer cropping across many areas of northern NSW are poor, with August and early September rainfall insufficient to replenish depleted subsoil moisture reserves.

“Significant rainfall is required during September to allow a dryland summer crop to be sown in northern NSW.”

Other influences include the prospect of high atmospheric pressure south of the continent and the possibility of a positive Southern Annular Mode. These contribute to the likelihood of greater easterly flow across southern Australia.