THE El Niño–Southern Oscillation (ENSO) is currently neutral – neither El Niño nor La Niña – according to the latest assessment by the Bureau of Meteorology. 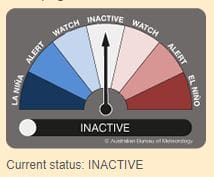 While the possibility of El Niño can’t be completely ruled out for 2019, the tropical Pacific Ocean is expected to remain in an ENSO-neutral phase over the coming months, meaning the ENSO Outlook remains at INACTIVE.

Model outlooks indicate a positive Indian Ocean Dipole is likely to be the dominant climate driver for Australia’s weather for much of the rest of 2019, meaning an increased likelihood of a drier than average winter–spring.

Most indicators of ENSO are neutral.

Atmospheric indicators, such as cloudiness near the Date Line and trade winds, have been close to average, while the Southern Oscillation Index (SOI) is the only ENSO indicator that has continued to hover close to El Niño thresholds.

Climate models indicate the tropical Pacific will maintain an ENSO-neutral state through the austral winter and spring.

While the Indian Ocean Dipole (IOD) index has been neutral in recent weeks, the broader Indian Ocean sea surface temperature and atmospheric patterns remain generally consistent with a positive IOD. This means the influence upon Australia is likely to remain.

Climate models forecast positive IOD conditions for the remainder of the austral winter and spring.

Typically, a positive IOD brings below average winter–spring rainfall, above average temperatures, and an earlier start to the fire season for southern and central Australia.