HANDY rain over the past week in the northern farming zone from Central Queensland (CQ) to north-west NSW has come too late for many winter crops, but bolstered prospects for the coming summer crop. 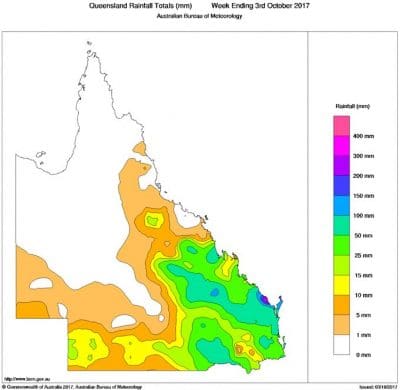 The heaviest falls were in CQ where Emerald recorded 75 millimetres over the past week, and in the western Darling Downs and Maranoa where some areas reportedly received over 100mm, while the highest official recordings were at Meandarra 60mm, St George 46mm and Roma 40mm.

The rain tapered off on the eastern Darling Downs where registrations generally ranged from 8-25mm, and in north-west NSW where Moree received 27mm and Mungindi 38mm, but areas to the south and west of there barely troubled the gauge.

In CQ, Barnes Ag Consulting agronomist, Matthew Barnes, Emerald, said many parts of the region had had between 30 and 90mm.

“It is basically too late for the winter crop. It is just a hindrance now as it’s stopped everyone from harvesting for three or four days. They should get going again over the weekend, but next week it looks like more rain mid-week,” he said.

“North of Emerald, most people are nearly finished, if not finished, harvest. South of Emerald most would be more than 50pc done and some have finished. It has been a better than average year in CQ both with wheat and chickpeas and the price has been good.”

On the Darling Downs, Landmark agronomist at Pittsworth, Hugh Reardon-Smith, said moderate falls on the eastern Downs weren’t sufficient to trigger summer plantings, but held the promise of a good season ahead. 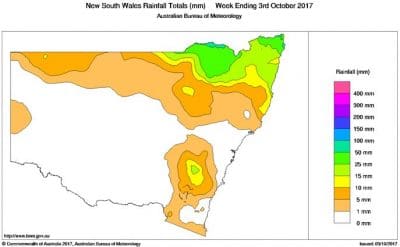 “It is not enough yet for summer crop, but everybody is optimistic it is the start of a change in the weather. There is more rain forecast for Friday, and then again on Monday and Tuesday,” he said.

“The rain will help the winter crop a little bit. There may be some more flowers on the later crops of chickpeas.

“But for summer crop, there may be a little bit of planting that might happen around Oakey where they have lighter soils, but generally nothing much this week. But it gives hope that things are turning around.”

Mr Reardon-Smith said the likely crop of choice for many eastern Downs growers this summer would be sorghum.

“The cotton area will be back, in particular the dryland, but even the irrigated because the irrigation water supplies have been cutting back.”

Elders agronomist at Dalby, Jordan McDonald, said the moderate falls on the eastern Downs were helpful for some winter crops because of the later planting this year.

But falls were too light to have a significant impact on summer crop potential and growers would be relying on the prospect of more rain before planting was assured.

“With storms forecast for the rest of the week, lifting soil moisture levels might do more to improve prospects for summer crop planting. If there is another 30mm people will start planting,” he said. 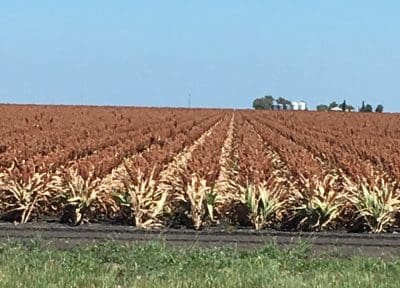 “Growers are leaning towards sorghum with the price over $300/tonne at the moment. It will be quite a big year for sorghum if we get the rain. With the moisture profile around 60 per cent we still need more rain to top it up.

“Mungbean plantings will be less due to the low price, and cotton will be well down on last year due to the price being down and the moisture not quite there for cotton. It needs a full profile.”

Mr McDonald said it was a different story in the western areas where places like Moonie and Goondiwindi had 50mm and there were reports of up to 100mm between Surat and St George.

“That will make an incredible difference. It is normally pre-dominantly winter crop out there, but if the price is up on sorghum and they haven’t had the best winter crop they will definitely swing around and put some sorghum in. Also, forages for cattle will be popular out there this year to get some quick feed,” he said.