RAIN throughout South Australia’s cropping zones last week, including some heavy falls over the weekend, have turned the season around for SA croppers.

While the eastern districts had been fairing reasonably well, the rest of the state’s winter cropping programs were struggling through a dry start to season that had hindered plantings and threatened crop prospects.

Last week’s rain was particularly welcomed in the Mid North which recorded rainfall totals of 25 to 50 millimetres; the Yorke Peninsula which had 25-50mm throughout the central districts and 50-100mm in the far south; and the Eyre Peninsula which had general falls of 25-50mm and some registrations of 50-100mm. 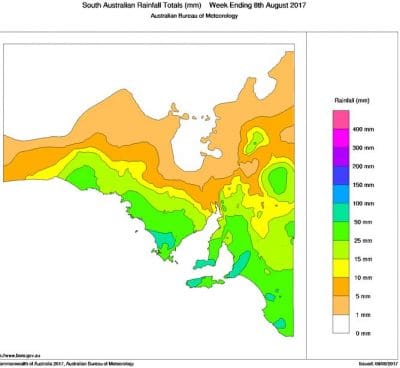 Australian Grain Growers Co-operative director and Eyre Peninsula farmer, Andrew Polkinghorne, said the season had changed significantly for the better on the peninsula.

“We are well on the way to average rainfall for August. July rainfall was quite good. On our own farm it ranged from almost average to above average,” he said.

However, Mr Polkinghorne said there would still be a wide variation in yields, depending on management and soil type.

“People who were able to get their crops in and up relatively early, those crops now look pretty respectable,” he said.

“On the southern parts of the peninsula the crops are still quite backward. While the rain will help those crops, they still have a long way to go. They have reasonable yield potential. Whether they achieve it or not will depend on the spring conditions.”

Mr Polkinghorne said he estimated about 85 per of planned plantings had gone in.

“There are some farmers who haven’t planted much, but generally speaking most farmers planted what they planned to plant, or close to it,” he said.

The rain late in the season has seen some farmers adjust their crop mix.

“People have mostly got their normal wheat area in. The planned barley area would have been quite low but that has increased a bit. By historical standards, the barley area is still not high.” 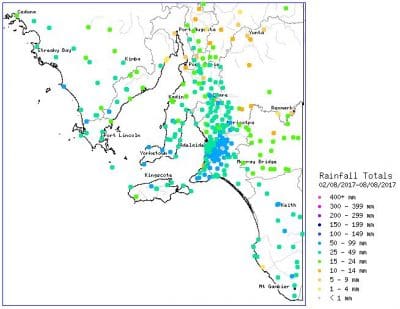 Grain Producers SA chief executive officer, Darren Arney, said good falls over the cropping zone had helped a lot of crops and in most areas “it looks a lot brighter”.

“There are some crops that are looking fantastic and some that are only one or two leaves and just coming out of the ground. The rain will help them, but we have four weeks of winter left and it will depend on how the spring shapes up,” he said.

“It would have added potential yield to what was looking pretty ordinary.”

Mr Arney said while crops in the east of the state had had a good run, planting on the Eyre Peninsula had been quite late due to the lack of sowing rain.

“They had a significant amount of subsoil moisture but they couldn’t get seeding rainfall to get the crops established. That led to some guys sowing a lot of crops dry. They have had quite a staggered germination with that,” he said.

“Others only completed 50 per cent of their seeding program. After rains in early July they put the rest of their better paddocks in. I’d say the area sown to crop would be down somewhat on what was originally planned.

“Unfortunately, some have sown triazine-tolerant canola dry, so they can’t replant to something else if it has come up and died.

“Given that grain prices have started to rally in that time, others have switched to feed barley which has a shorter growing season.”

Mr Arney said mice were still present in many areas and growers would have to monitor the situation coming into spring.

“We haven’t had a really cold and wet winter that would control mice. It’s expected they will start breeding again in spring,” he said.

“There is also the need to be monitoring for Russian Wheat Aphid as the weather warms up.”