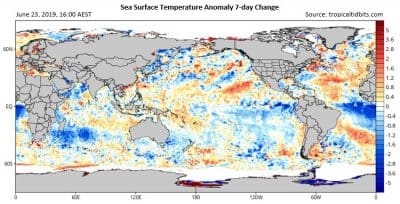 THE EARTH’S climate is primarily driven by energy from the sun. Most of the sun’s energy is reflected into space, but some is trapped by gases in the atmosphere and retained by the sea, air and land.

Astronomical variations and atmospheric shielding lead to the incoming solar radiation falling unevenly on the surface of the earth. Winds and ocean currents further redistribute the heat and moisture around the globe, creating climate zones.

Local oceanic, atmospheric, and temperature phenomena within these climate zones generate the weather that we experience on a localised basis across the globe. Here in Australia, two of the key drivers of local weather and climate variability are the Indian Ocean Dipole (IOD) and the El Niño Southern Oscillation (ENSO).

The IOD, also known as the Indian Niño, is an irregular oscillation of sea-surface temperatures in which the tropical eastern Indian Ocean becomes alternately warmer and then colder than the western part of the ocean. The IOD measures the difference between the seas surface temperatures in the two ocean regions and oscillates between, ‘positive’, ‘neutral’ and ‘negative’.

In the negative IOD phase, the sea surface temperatures are warmer than average around Indonesia and off the north-west coast of Western Australia and cooler than average in the western Indian Ocean. This leads to stronger westerly winds across the Indian Ocean, higher convection near Australia, and generally results in enhanced rainfall across the Australian continent.

The positive phase sees colder than average sea surface temperatures in the eastern Indian ocean and the opposite in the western Indian Ocean.  There is an increase in the easterly winds across the Indian Ocean in association with this sea surface temperature pattern, while convection near Australia reduces. This tends to lead to dryer than average seasons or even drought situations in Australia.

The two phases relate to another phenomenon called the Walker circulation. This is a model of the lower atmosphere airflow over the tropical regions of the Pacific Ocean. The Walker circulation arises from a pressure gradient caused by a warm and wet low-pressure area in the western Pacific around Indonesia, accompanied by a cool and dry high-pressure area over the eastern Pacific.

An exceptionally strong Walker circulation causes a La Niña, resulting in cooler ocean temperatures in the eastern Pacific due to increased upwelling of the cold deep seawater. A reversal or weakening of the Walker circulation eliminates or decreases the upwelling, resulting in above average ocean temperatures off the coast of Peru, Ecuador and Columbia.

So, what are the sea surface temperatures doing at the moment?

The Pacific Ocean is currently near El Niño thresholds, and the IOD is in positive territory – both suggesting dryer than average conditions for the balance of winter and into the critical spring period.

The Bureau of Meteorology (BOM) is calling the current ENSO status as El Niño watch. However, the BOM is forecasting it to shift to a more neutral outlook in coming months. The IOD is currently sitting in positive territory, and according to the BOM, this is likely to persist and dominate the weather patterns across the Australian continent into the spring.

Nevertheless, looking at the change in equatorial sea surface temperatures in June, the trend is encouraging. Cooling is evident in the eastern Pacific, and western Indian Oceans and the required warming is evident to the north of Australia in the western Pacific and eastern Indian Oceans. The graphic above reveals the change over the week to June 23.

The burning question here is, will the trend continue, and will it persist long enough to change the spring rainfall outlook? Two or three weeks of encouraging data does not represent a sustained trend in the meteorological world. The trend needs to persist for at least a couple of months before a wide-scale change in local weather patterns is likely.

Despite recent precipitation events, year to date rainfall registrations across almost all of Australia’s cropping regions are still below average. In some parts of New South Wales and Queensland, the rain gauge has rarely been bothered in the last 18 months, and they are still in the grip of the drought that plagued east coast grain production in 2018.

The crop may be in the ground through southern New South Wales, Victoria, South Australia and Western Australia but many areas will require above average winter and spring rainfall just to achieve average yields.

Continued warming off the western Australian coast and cooling in the eastern Pacific Ocean are critical ingredients for a long-term change to more normal, or even wetter than normal, precipitation events in Australia for the balance of 2019.

Let’s hope that recent changes become a long-term trend that manifests itself in a spring conducive to above average winter crop yields and enough early spring rain in the summer cropping regions to get a widescale sorghum plant.