Drier than average likely, but may start to ease in summer

Rainfall is likely to be below average for most of the country for the remainder of October and November.

However, northwest WA has roughly equal chances of being wetter or drier across most outlook periods, with a slightly increased chance of being wetter than average in December.

The drier outlook continues into December for southern Australia, eastern Queensland, far northeast NSW and much of the NT, with the remainder of the country having roughly equal chances of being wetter or drier than average.

While the outlooks for drier than average conditions ease in the coming months, it should be noted that this won’t necessarily ease the current rainfall deficiencies. Several months of above average rainfall would be needed to see a recovery from current conditions. 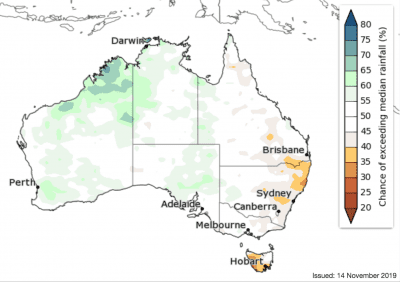 Warmer days likely for the rest of spring and summer 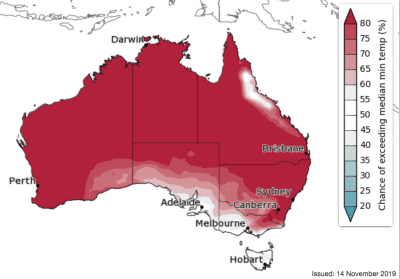 The chance of above median minimum temperature for December 2019 to February 2020.

Daytime temperatures for summer are very likely to be warmer than average across Australia. 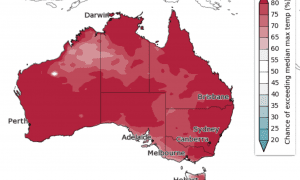 The chance of above median maximum temperature for December 2019 to February 2020.

Nights are likely to be 1 to 2 degrees cooler than average in the southeast for the 18 November to 1 December period, but 1 to 2 degrees warmer in much of WA, the northern NT, and parts of the east coast.

Cooler nights for the southeast and northeast are likely to continue in December for some areas, but December to February nights overall are forecast to be warmer than average almost nation-wide. 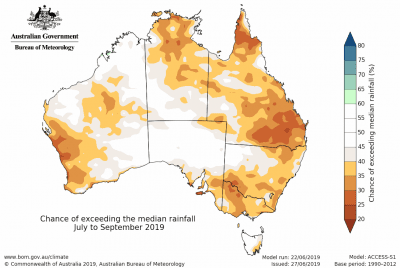