July to September is likely to be drier than average in northern and eastern mainland Australia.

Historical outlook accuracy for July to September is moderate over most of Australia, except along the WA border and across most of the far north, where accuracy is low to very low.

The Bureau’s climate model indicates that the El Niño–Southern Oscillation and the Indian Ocean Dipole are forecast to remain neutral for the rest of winter and thus have less influence on Australia’s climate. While the Bureau’s model suggests neutral ENSO is likely, five of eight international models suggest El Niño may develop in spring.

The Bureau’s climate model is forecasting higher than average pressure to the south of Australia during the July to September period. This may weaken westerlies and result in fewer cold fronts extending into southeast Australia.

In addition to the natural drivers such as the El Niño–Southern Oscillation (ENSO) and the IOD, Australian climate patterns are also being influenced by the long-term increasing trend in global air and ocean temperatures. For instance, southern Australia has seen a slow southward shift in autumn/winter frontal systems over the past three decades.

Chance of exceeding 50mm for July-Sep: July to September days are likely to be warmer than average for most of Australia. Chances are highest (greater than 80%) over Tasmania, central and eastern Victoria, eastern NSW and in southeast Queensland.

Nights in July to September are likely to be warmer than average for most of Australia, except the tropical north. Chances of warmer nights exceed 80% in Tasmania, and along the NSW and Victorian coasts. 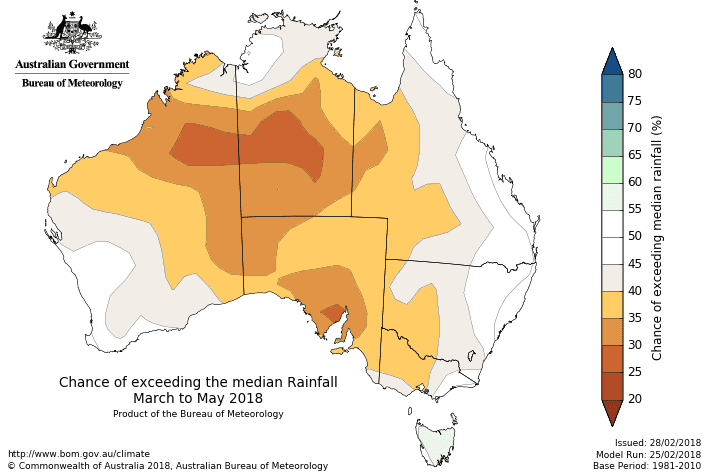