Drier three months likely for many

A drier than average three months is likely for large parts of the country, extending from the northern NT, through Queensland and NSW, and into Victoria and southeast SA. Western and central WA and southeast Tasmania are also likely to have a drier three months.

For the month of July, the drier than average signal is confined to western WA, and central to eastern NSW extending up into southern Queensland. The rest of the country has roughly equal chances of a wetter or drier than average month.
While the dry signal is widespread across the tropical north, much of this region typically receives little or no rainfall at this time of year.

Historical outlook accuracy for July to September is moderate to high for most of the country but low in parts of southeast Australia, far northern Queensland and in the Gascoyne region of WA. Chance of exceeding 50mm during July-Sep Warmer than average days and nights for northern and eastern Australia

July to September days are likely to be warmer than average for most of Australia. The exceptions are in southern WA, parts of northern Queensland, western Tasmania and the far southern mainland coasts, where there is no shift towards either warmer or cooler than average days.

Nights are also likely to be warmer than average for the northern half of Australia, eastern NSW, eastern Victoria and Tasmania. Much of the southern mainland has roughly equal chances of warmer or cooler nights. Dry soils and the forecast for drier than average conditions mean more cloud-free nights than average are likely, increasing the risk of frost in susceptible areas. Maps below compare BOM’s rainfall forecast for March to May 2019, issued in February 2019, with actual rainfall deciles recorded over the Mar to May 2019 period.

FORECAST MEDIAN RAINFALL MARCH TO MAY 2019: 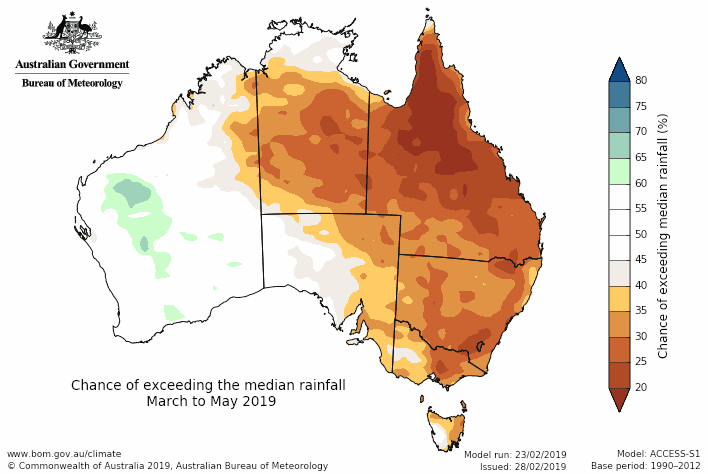 RAINFALL DECILES RECORDED MARCH TO MAY 2019: