Drier winter likely for most of southern Australia 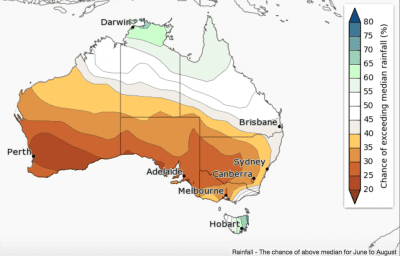 June is likely to be drier than average over southern and central WA, SA and western parts of NSW and Victoria.
Click on image to enlarge

Winter (June to August) rainfall is likely to be below average over the southern half of mainland Australia, according to the Bureau of Meteorology’s latest three month climate outlook statement released this morning.

The Top End of the NT is likely to have a wetter June to August, but it is now the dry season, and median rainfall at this time of year is very low. Only a small amount of rainfall—which could come from a single rain event—would be needed to exceed the median. 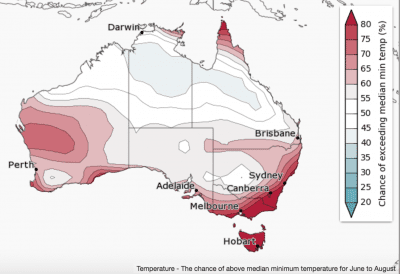 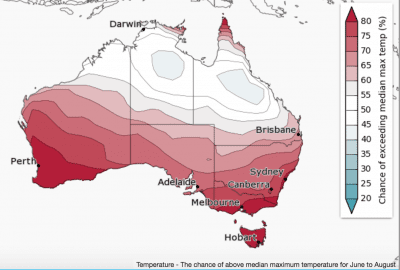 Daytime temperatures for June to August are likely to be warmer than average for the southern half of Australia and the tip of Cape York Peninsula.

Night-time temperatures for June to August are likely to be warmer for southern WA, southeast SA, eastern NSW, Victoria, Tasmania and the tip of Cape York Peninsula. Most of the country has roughly equal chances of warmer or cooler winter nights.