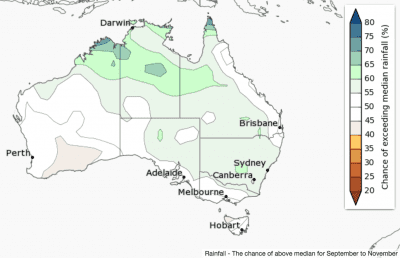 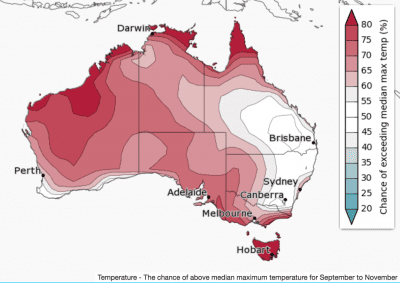 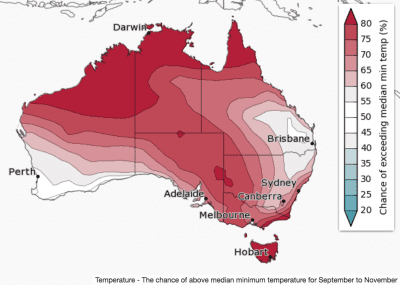 Spring rainfall is likely to be above average across parts of northern Australia, according to the Bureau of Meteorology’s latest three monthly seasonal climate outlook released today.

Elsewhere, the chances of a wetter or drier spring from September through to November are roughly equal.

Warmer days are likely across much of Australia, except eastern NSW and southern Queensland.

The current negative Indian Ocean Dipole (IOD) pattern is expected to weaken over the spring period. This means its influence on Australian rainfall is likely to decrease in the coming months.

The El Niño–Southern Oscillation (ENSO) is neutral, with sea surface temperatures showing a cooling trend since late last year. In periods when La Niña is developing or near thresholds, some areas typically experience La Niña-like impacts, including above average rainfall across northern Australia.

With major climate drivers either weakening, or in a neutral state, the rainfall outlooks generally show roughly equal chances of a wetter or drier season.

In addition to the shorter-term natural drivers, Australian climate patterns are being influenced by the long-term increasing trend in global air and ocean temperatures.