THE odds of eastern Australia receiving above-average rains this summer have improved as modelling points to the development of a weak La Nina in the Pacific Ocean, according to University of Southern Queensland’s professor Roger Stone. 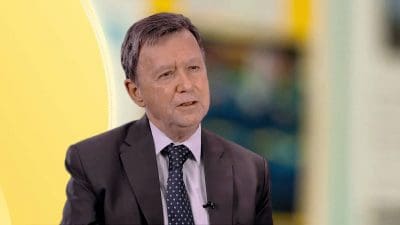 Professor Stone said the change in dynamics indicating the potential for a small La Nina event was a good sign for eastern Australian farmers.

“There has been a change in the weather in the last few weeks with rain and storms. The Pacific Ocean has completely changed its character. It might not fully reach the complete definition of a La Nina, but it is pretty close to it.”

Professor Stone said the likelihood of increased rains might not be welcomed in the sugar regions where it could adversely impact on harvest, but for sorghum and cotton growers the outlook was looking positive.

“The potential for summer rain in eastern Australia is increasing. At the moment we are advising a major turnaround in rainfall patterns over summer,” he said.

“It depends on where you are. Central Queensland to start with, but the whole of eastern Australia is looking good.”

Meanwhile, the Bureau of Meteorology in its latest report has taken a cautious outlook, listing the El Niño–Southern Oscillation (ENSO) and the Indian Ocean Dipole (IOD) as currently remaining neutral, with the chance of La Nina conditions developing in the Pacific by December.

The bureau reports the surface of the tropical Pacific Ocean has warmed over the past fortnight as a result of weakened trade winds.

This has reversed the cooling trend that had been observed since mid-winter. While sea surface temperatures remain well within the neutral range, anomalously cool water persists below the surface.

International climate models surveyed by the Bureau suggest this recent surface warming may only be temporary, with further cooling of the tropical Pacific Ocean likely.

Five of the eight models suggest sea surface temperatures will reach La Niña thresholds by December 2017, but only three maintain values for long enough to be classified as a La Niña event.

While unusual, it is not unheard of to see La Niña develop this late in the year.

Of the late-developing La Niña events, their effect on summer rainfall has been mixed, with some leading to widespread above-average falls across eastern Australia, and others having minimal effect.

The current three-month rainfall outlook from the bureau suggests only a 50pc likelihood of wetter conditions in many parts of the country. 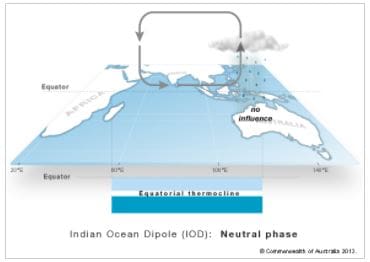 The bureau says the Indian Ocean Dipole (IOD), which measures the difference between sea surface temperatures of the tropical western and eastern Indian Ocean, remains neutral.

Three of the six climate models surveyed suggest positive IOD thresholds may be reached during spring, but these positive values would be short-lived as IOD events naturally decay by December.