Remnants of ex-tropical cyclone Kelvin generated moderate falls as it tracked across southeast Western Australia and into the Great Australian Bight.

The highest weekly total was 379 mm at Yabulu Qld Nickel, just north of Townsville in Queensland.

Past seven days: At the beginning of the week, shower and thunderstorm activity associated with passage of ex-tropical cyclone Kelvin produced moderate falls over central and southeastern parts of Western Australia, with some light falls in coastal South Australia.

Widespread thunderstorms and showers in a very moist air mass produced moderate to locally heavy falls across eastern Queensland during the week, as a broad upper-level disturbance and surface troughs lingered over the State. During the first half of the week this surface trough was connected to ex-tropical cyclone Kelvin as it passed into the Bight.

During the second half of the week, a surface trough extended through inland eastern Australia, across the Northern Territory, and around the west coast of Western Australia.

As the eastern tail of the trough and a series of weak cold fronts crossed the southeast, light rain fell in southwestern Victoria and moderate falls were recorded in Tasmania. Once the trough reached the east coast, light to moderate falls were recorded in northeastern Victoria and southeastern New South Wales, becoming showers and storms with moderate to locally heavy falls across eastern New South Wales.

Assisted by a cold front crossing the southwest of Western Australia, thunderstorms and showers formed along the western half of the trough extending around western and northern Australia. Moderate to locally heavy falls were recorded in the Kimberley, the Top End, and the north and east of Queensland during the second half of the week, with light to moderate falls in the eastern Pilbara and Gascoyne, and across much of the South West Land Division at the end of the week.

The highest weekly total was 379 mm at Yabulu Qld Nickel, north of Townsville in Queensland. Rainfall totals exceeding 200 mm were recorded in the tropical north and southeast coast districts of Queensland, and northeastern New South Wales.

Rainfall totals exceeding 100 mm were recorded in across Queensland’s northern interior, along much of that State’s eastern coast and in the Central Highlands District, and also in a small area of the northwest of the Northern Territory around Joseph Bonaparte Gulf.

Rainfall totals between 50 mm to 100 mm were recorded in the northern Kimberley and parts of southeastern Western Australia, surrounding higher falls in the northwest of the Northern Territory, across most of northern and eastern Queensland, eastern New South Wales, and elevated parts of western Tasmania.

Rainfall totals between 10 mm 50 mm were recorded across most of the remainder of the Kimberley and much of the west and south of Western Australia, the northern half of the Northern Territory, most of Queensland away from the southwest, the eastern half of New South Wales, the southwest and east of Victoria, and remaining parts of Tasmania. Similar totals were recorded in pockets of coastal South Australia.

Little or no rainfall was recorded in Western Australia’s Interior District, the southern half of the Northern Territory, most of South Australia away from the coast, northwestern and central Victoria, western New South Wales, and southwestern Queensland. 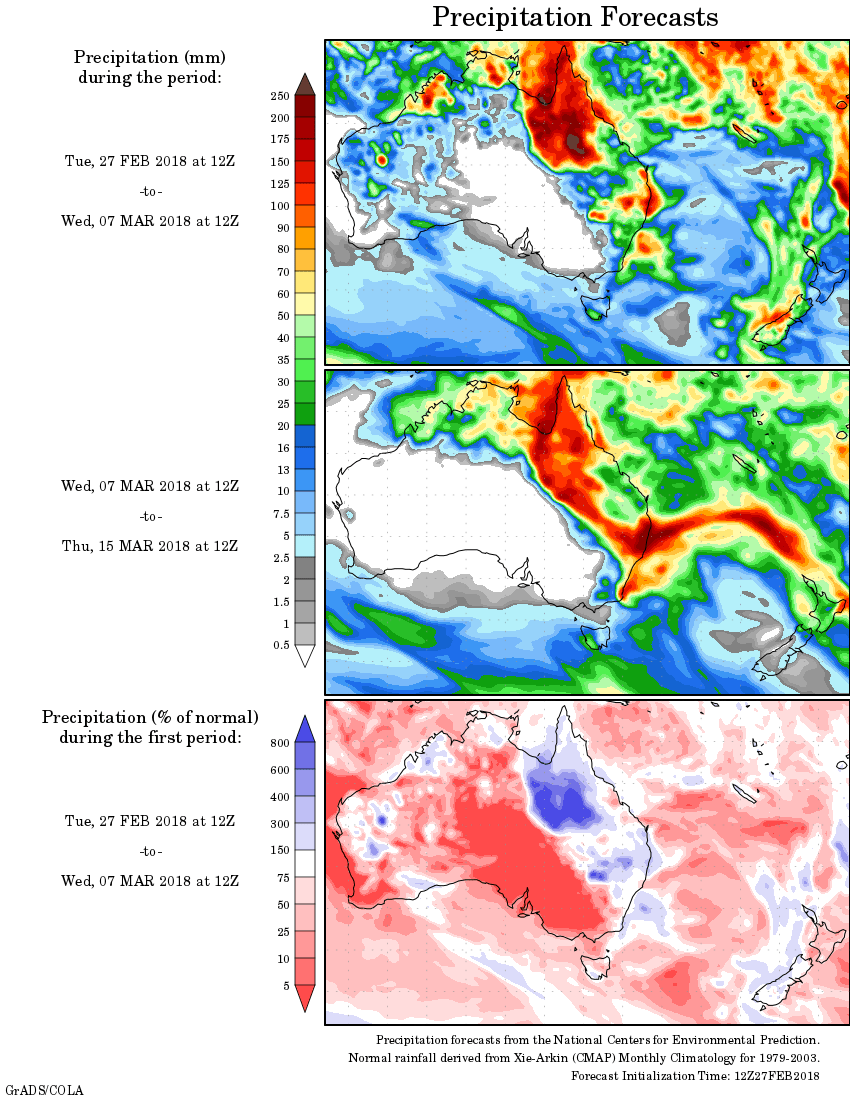