A complex low pressure system and cold fronts brought moderate to locally heavy falls to the southeast, while cold fronts produced light to moderate falls in the southwest.

Past seven days: At the start of the week, a cold front tracked across Tasmania, and brought light falls to western parts of the State. In the west, another cold front approached southwest Western Australia and swept across the southern coast, generating light falls. As the system moved eastwards in the Bight, a pre-frontal trough produced light falls in southeastern South Australia, southern Victoria and western Tasmania.

By the middle of the week, the complex area of low pressure intensified over Tasmania, with multiple cold fronts extending north into Victoria and New South Wales. Moderate to heavy falls were recorded over most of Tasmania, with locally heavier falls in the State’s northeast. Moderate falls were also recorded from southern central to northeastern Victoria, and in the Snowy Mountains in New South Wales, while widespread light falls were reported from southeastern South Australia, remaining areas of Victoria and across the inland southeast of New South Wales.

At the end of the week, another cold front crossed the southeast, and produced widespread light falls in southeastern South Australia, Victoria, Tasmania and in parts of inland southern New South Wales. Moderate falls associated with the passage of the cold front were recorded in southern central Victoria and western Tasmania.

Rainfall totals in excess of 100 mm were recorded in parts northeastern and east coast Tasmania, including the highest weekly total of 181 mm at Gray (Dalmayne Rd), on the eastern coast.

Rainfall totals in excess of 50 mm were recorded in parts of Tasmania’s east and west coasts, and in areas of West and South Gippsland in Victoria.

Rainfall totals between 10 mm and 50 mm were observed along the far south coast of South West Western Australia; southeastern South Australia; most of Victoria except in the northwest; remaining areas of Tasmania; and in the Snowy Mountains and South West Slopes districts in New South Wales. Falls less than 10 mm were recorded along other parts of southeast Western Australia, southern South Australia, and areas of inland southern New South Wales.

Little or no rainfall was recorded in remaining areas of Western Australia, the Northern Territory, South Australia away from the south coast, Queensland, and New South Wales away from the inland south and the southeast. 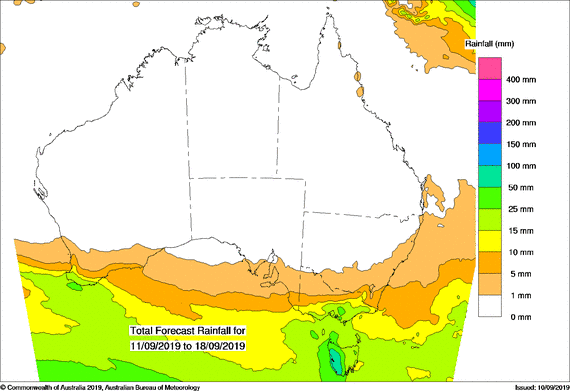 Source: BOM. (Technical problems at the source prevented the publication of our usual rainfall outlook maps this week)