Cold fronts brought moderate falls to Tasmania and Victoria, while the tropical north had isolated thunderstorms and showers.

Past seven days: At the start of the week, a pair of cold fronts, connected to a complex low pressure system to the south of Tasmania, moved quickly through the country’s southeast, and produced mainly light rainfall in southeastern South Australia, southern Victoria and Tasmania.

In the middle of the week, a trough in the country’s east dragged dry northerly winds across New South Wales before a vigorous south-westerly flow and embedded cold front brought a strong southerly wind change to the southeast and then across New South Wales. Moderate rainfall was recorded in the far southeastern South Australia, southern and alpine regions in Victoria, and western Tasmania. Apart from moderate falls in the Snowy Maintains district, and light falls in the far south, most of New South Wales failed to record any measurable rainfall from the systems, particularly in the very dry northeast regions.

At the end of the week, another cold front moved through the far southeast of the country, bringing further light to moderate rainfall  to the southeastern South Australia, southern Victoria and western Tasmania.

Rainfall totals between 50 mm and 100 mm were recorded in western Tasmania, and the west Gippsland and alpine regions in Victoria. The highest weekly total was 159 mm at Mount Read in Tasmania.

Weekly rainfall totals between 10 mm and 50 mm were recorded in most of Tasmania, southern and eastern Victoria, southeastern South Australia, southern Tableland areas in New South Wales, the west Kimberley coast in Western Australia, northwestern parts of the Northern Territory, and the Cape York Peninsula’s west coast in Queensland.

Little or no rainfall was recorded in most of the country. 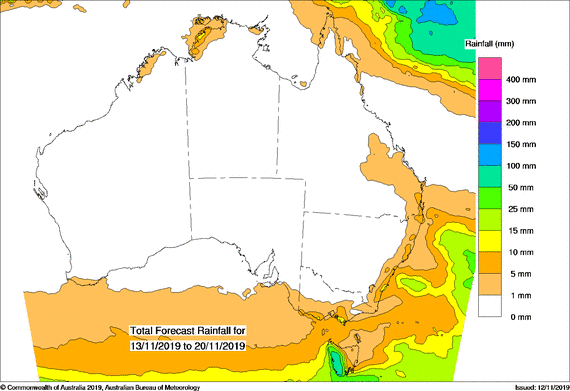